WASHINGTON, D.C., October 29, 2014 – When listening to the Earth, what clues can seismic data reveal about the impact of urban life? Although naturally occurring vibrations have proven extremely useful to seismologists, until now the vibrations caused by humans haven't been explored in any real depth.

Scripps Institution of Oceanography researchers Nima Riahi, a postdoctoral fellow, and Peter Gerstoft, a geophysicist, will describe their efforts to tap into an urban seismic network to monitor the traffic of trains, planes, automobiles and other modes of human transport. They will present the work this week at the 168th Meeting of the Acoustical Society of America (ASA), which will be held October 27-31, 2014, at the Indianapolis Marriott Downtown Hotel.

Journalists are invited to remotely access a live-streamed video webcast about this research and several other topics of newsworthy interest. The webcast will take place at 3:00 p.m. ET on Wednesday, October 29 and will be archived for one year afterward. For more information, contact: jbardi@aip.org

Traffic in urban areas generates both acoustic and seismic "noise." While seismic noise typically isn't perceptible by humans, it could prove to be an interesting data source for traffic information systems in the near future.

"Earlier this year an industrial partner offered us access to a large vibration dataset acquired over the city of Long Beach, Calif., so we seized the opportunity," explained Riahi.

This particular dataset consists of a 5,300-geophone network—deployed as part of a hydrocarbon industry survey—covering an area of more than 70 km2. Geophone devices are commonly used to record energy waves reflected by the subsurface geology as a way of mapping out geologic structures or track earthquakes.

"By recording vibrations via geophones spaced roughly every 100 meters (300 feet), we were able to look into activity in Long Beach with a resolution below a typical city block," said Riahi.

This begs the question: What urban processes can the space and time structure of vibrational intensity reveal?

Much to their surprise, Riahi and Gerstoft discovered that "by using mostly standard signal processing, we can follow a metro schedule, count aircraft and their acceleration on a runway, and even see larger vehicles on a 10-lane highway." More refined techniques and algorithms may well uncover many other types of manmade signals within the Earth.

These findings indicate that urban vibrations can serve as a new data source to observe cities. "Traffic monitoring tasks are an important and obvious application, but other uses may be involved in urban area characterization in which the type and schedule of activities can be visualized, so that it's possible to vibrationally identify industrial, residential or office zones," Riahi added.

Presentation 5aNS1, "Traffic monitoring with noise: Investigations on an urban seismic network," by Nima Riahi and Peter Gerstoft will take place on Friday, October 31, 2014, at 9:50 AM in Marriott 7/8. The abstract can be found by searching for the presentation number here: https://asa2014fall.abstractcentral.com/planner.jsp

The 168th Meeting of the Acoustical Society of America (ASA) will be held October 27-31, 2014, at the Indianapolis Marriott Downtown Hotel. It will feature more than 1,100 presentations on sound and its applications in physics, engineering, and medicine. Reporters are invited to cover the meeting remotely or attend in person for free.

We will grant free registration to credentialed journalists and professional freelance journalists. If you are a reporter and would like to attend, contact Jason Bardi (jbardi@aip.org, 240-535-4954), who can also help with setting up interviews and obtaining images, sound clips, or background information.

ASA's World Wide Press Room is being updated with additional tips on dozens of newsworthy stories and with lay-language papers, which are 300-1,200 word summaries of presentations written by scientists for a general audience and accompanied by photos, audio, and video.

A press briefing featuring a selection of newsworthy research will be webcast live from the conference the afternoon of Wednesday, October 29. A separate announcement, which includes topics and times, will be sent later this week. Register at: http://www.aipwebcasting.com/webcast/registration/oct2014.php

The Acoustical Society of America (ASA) is the premier international scientific society in acoustics devoted to the science and technology of sound. Its 7,000 members worldwide represent a broad spectrum of the study of acoustics. ASA publications include The Journal of the Acoustical Society of America (the world's leading journal on acoustics), Acoustics Today magazine, books, and standards on acoustics. The society also holds two major scientific meetings each year. For more information about ASA, visit our website at http://www.acousticalsociety.org

Meeting
168th Meeting of the Acoustical Society of America 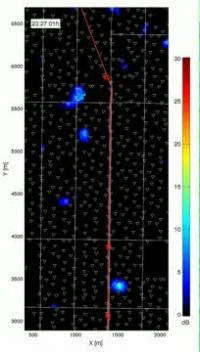 Section of the Metro Track in Long Beach