The remnants of Tropical Depression 16E (TD16E) have moved over the U.S. Southwest and an infrared image from NOAA's GOES-West satellite showed the associated clouds over Arizona and New Mexico.

The National Weather Service Weather Prediction Center (WPC) in College Park, Maryland, noted that light to moderate rain is expected to continue for central Arizona and New Mexico on Sept. 22. Flash flood watches are still in effect for portions of eastern Arizona and western New Mexico.

At 0900 UTC (5 a.m. EDT), the WPC noted that there was no discernable surface circulation and an infrared image from the GOES-West satellite taken at 1200 UTC (8 a.m. EDT/5 a.m. PDT) showed a stream of clouds from southwest to northeast over Arizona and New Mexico. The image was created at the NASA/NOAA GOES project at NASA's Goddard Space Flight Center, Greenbelt, Maryland.

The WPC noted that TD16E's remnants should continue moving in a northeast direction with heavy rain developing in northeast New Mexico and eventually portions of the central high plains.

Remnants of Tropical Depression 16E raining over US Southwest 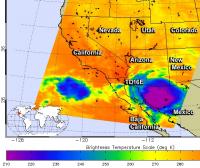