Carbon dioxide (CO2) is one of the major greenhouse gases causing global warming. If carbon dioxide could be converted into energy, it would be killing two birds with one stone in addressing the environmental issues. A joint research team led by City University of Hong Kong (CityU) has developed a new photocatalyst which can produce methane fuel (CH4) selectively and effectively from carbon dioxide using sunlight. According to their research, the quantity of methane produced was almost doubled in the first 8 hours of the reaction process.

The research was led by Dr Ng Yun-hau, Associate Professor in the School of Energy and Environment (SEE), in collaboration with researchers from Australia, Malaysia and the United Kingdom. Their findings have been recently published in the scientific journal Angewandte Chemie, titled "Metal-Organic Frameworks Decorated Cuprous Oxide Nanowires for Long-lived Charges Applied in Selective Photocatalytic CO2 Reduction to CH4".

"Inspired by the photosynthesis in nature, carbon dioxide can now be converted effectively into methane fuel by our newly designed solar-powered catalyst, which will lower carbon emission. Furthermore, this new catalyst is made from copper-based materials, which is abundant and hence affordable," said Dr Ng.

He explained that it is thermodynamically challenging to convert carbon dioxide into methane using a photocatalyst because the chemical reduction process involves a simultaneous transfer of eight electrons. Carbon monoxide, which is harmful to human, is more commonly produced in the process because it requires the transfer of two electrons only.

He pointed out that cuprous oxide (Cu2O), a semiconducting material, has been applied as both photocatalyst and electrocatalyst to reduce carbon dioxide into other chemical products like carbon monoxide and methane in different studies. However, it faces several limitations in the reduction process, including its inferior stability and the non-selective reduction which causes the formation of an array of various products. Separation and purification of these products from the mixture can be highly challenging and this imposes technological barrier for large scale application. Furthermore, cuprous oxide can be easily corroded after brief illumination and evolve into metallic copper or copper oxide.

To overcome these challenges, Dr Ng and his team synthesised a novel photocatalyst by enwrapping cuprous oxide with copper-based metal-organic frameworks (MOFs). Using this new catalyst, the team could manipulate the transfer of electrons and selectively produce pure methane gas.

Electrons stayed in MOF with higher chance of having chemical reactions

Dr Wu Hao, the first author of the paper who is also from SEE, pointed out one of the highlights of this research and said: "By using the advanced time-resolved photoluminescence spectroscopy, we observed that once the electrons were excited to the conduction band of the cuprous oxide, they would be directly transferred to the lowest unoccupied molecular orbital (LUMO) of the MOF and stayed there, but did not return quickly to their valence band, which is of lower energy. This created a long-lived charge separated state. Therefore, electrons that stayed in the MOF would have a higher chance to undergo chemical reactions."

Extends the understanding of relationships between MOFs and metal oxides

Previously, it was generally believed that the improved photocatalytic activities were merely induced by MOF's reactant concentration effect and MOF only served as a reactant adsorbent. However, Dr Ng's team unveiled how the excited charges migrate between cuprous oxide and MOF in this research. "MOF is proven to play a more significant role in shaping the reaction mechanism as it changes the electron pathway," he said. He pointed out that this discovery has extended the understanding of relationships between MOFs and metal oxides beyond their conventional physical/chemical adsorption type of interactions to facilitating charge separation.

The team has spent more than two years to develop this effective strategy in converting carbon dioxide. Their next step will be to further increase the methane production rate and explore ways to scale up both the synthesis of the catalyst and the reactor systems. "In the entire process of converting carbon dioxide to methane, the only energy input we have used was sunlight. We hope in the future, carbon dioxide emitted from factories and transportation can be 'recycled' to produce green fuels," concluded Dr Ng.

Dr Ng is the corresponding author of the paper and the first author is Dr Wu Hao. Other collaborating researchers are from University College London, University of New South Wales, Monash University in Malaysia, and the Swinburne University of Technology.

The research was funded by CityU, Hong Kong Research Grant Council and the Australian Research Council. 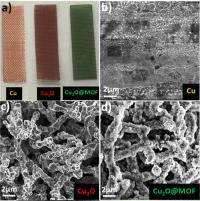