(Millbrook, N.Y.) Triclosan – a synthetic antibacterial widely used in personal care products – is fueling the development of resistant bacteria in streams and rivers. So reports a new paper in the journal Environmental Science and Technology, which is the first to document triclosan resistance in a natural environment.

Invented for surgeons in the 1960s, triclosan slows or stops the growth of bacteria, fungi, and mildew. Currently, around half of liquid soaps contain the chemical, as well as toothpastes, deodorants, cosmetics, liquid cleansers, and detergents. Triclosan enters streams and rivers through domestic wastewater, leaky sewer infrastructure, and sewer overflows, with residues now common throughout the United States.

Emma Rosi-Marshall, one of the paper's authors and an aquatic ecologist at the Cary Institute of Ecosystem Studies in Millbrook, New York explains: "The bacterial resistance caused by triclosan has real environmental consequences. Not only does it disrupt aquatic life by changing native bacterial communities, but it's linked to the rise of resistant bacteria that could diminish the usefulness of important antibiotics."

Urbanization was correlated with a rise in both triclosan concentrations in sediments and the proportion of bottom-dwelling bacteria resistant to triclosan. A woodland creek had the lowest levels of triclosan-resistant bacteria, while a site on the North Shore Channel downstream of 25 combined sewer overflows had the highest levels.

The research team found that combined sewer overflows that release untreated sewage are a major source of triclosan pollution in Chicago's North Shore Channel. In addition, their findings support past work that indicates sewage treatment plants can effectively remove triclosan from wastewater.

Nearly 800 cities in the United States rely on combined sewer overflows, with the Environmental Protection Agency citing them as a major water pollution concern.

Artificial stream experiments conducted at Loyola University confirmed field findings that triclosan exposure triggers an increase in triclosan-resistant bacteria. In addition to the creation of these resistant bacteria, researchers also found a decrease in the diversity of benthic bacteria and a shift in the composition of bacterial communities. Most notable were a 6-fold increase in cyanobacteria and a dramatic die-off of algae.

Rosi-Marshall explains how these shifts could impact aquatic life, "Cyanobacteria are less nutritious than algae and can produce toxins. In triclosan-polluted streams and rivers, changes in microbial communities could negatively affect ecological function and animal communities."

The study is the latest in an ongoing effort to better understand the environmental and human health consequences of synthetic antimicrobials. Funding was provided by a grant from the Illinois Sustainable Technology Center.

The Cary Institute of Ecosystem Studies is a private, not-for-profit environmental research and education organization in Millbrook, N.Y. For thirty years, Cary Institute scientists have been investigating the complex interactions that govern the natural world. Their objective findings lead to more effective policy decisions and increased environmental literacy. Focal areas include air and water pollution, climate change, invasive species, and the ecological dimensions of infectious disease. 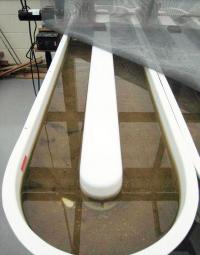 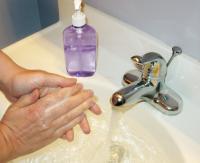 When Antibacterials Go Down the Drain