Widespread die-off of piñon pine across the southwestern United States during future droughts will occur at least five times faster if climate warms by 4 degrees Celsius, even if future droughts are no worse than droughts of the past century, scientists have discovered in experiments conducted at the University of Arizona's Biosphere 2.

Their study is the first to isolate the impact of just temperature on tree mortality during drought. The temperature effect is usually confounded by varying weather and bark beetle and other pest attacks. Quantitative information on how sensitive drought-stressed trees are to hotter temperatures is critical for predicting drastic, sudden and widespread die-offs, the scientists said.

When the researchers extrapolated this temperature effect to the region's 100-year historical drought record, they found that widespread piñon pine die-offs can be predicted to occur five times more frequently because of the higher temperature alone, without factoring in predictions for worsening drought, insect attack or other consequences of climate change.

The scientists are publishing their paper titled "Temperature sensitivity of drought-induced tree mortality portends increased regional die-off under global-change-type drought" in the Proceedings of the National Academy of Sciences.

"What was really striking is that all the trees in the warmer research area died first," said Henry Adams of UA's ecology and evolutionary biology department, who headed the experiment. "It's the kind of data that you don't have to do statistics on, because the numbers don't overlap. The results say that if the climate is warmer, then it takes a shorter drought to kill the trees. And there are many more shorter droughts than longer droughts in the historical record."

Regional tree die-off changes the landscape so much that it can have profound implications that include changes in nitrogen and other soil nutrients, hydrology, erosion, landscape reflectivity or 'albedo', release of stored carbon into the atmosphere, and wildlife habitat, Adams said.

"The Biosphere 2 experiment is a critical next step to understanding how global climate change can trigger large-scale vegetation change on dramatically short timescales," said professor David D. Breshears of UA's School of Natural Resources, a scientist on the Biosphere 2 experiment. "The problem is that there are all these models predicting vegetation shifts, but we don't really know what it takes to kill trees and how that might change with warmer temperatures. This study gives us a measure of how sensitive trees are to temperature."

Media reported extensively on Breshears' earlier field work which documented that close to 10 percent of the piñon-juniper woodlands in a four-state region of the U.S. Southwest were killed by the major drought that started in 2000. The 2000 drought was not as dry but was warmer than the previous major drought of the 1950s. Unlike the 1950s drought, the 2000 drought killed trees at wetter as well as drier sites, Breshears and his colleagues discovered. They reported the work in a 2005 paper also published by the Proceedings of the National Academy of Sciences. Their results suggested that temperature plays a key role in regional die-off.

"Henry 's (Biosphere 2) study says we're going to have five times more die-offs than we had throughout the 1900s if temperatures become 4 degrees Celsius hotter," Breshears said. " I don't want to be alarmist, but that is a super-conservative projection, because the result relates only to temperature, not to increased drought or bark beetles, which we know will exacerbate the problem. So we could be in for a lot more change."

Adams, Breshears, Biosphere 2 director Travis Huxman and others also confirmed the primary mechanism that causes drought-stressed tree mortality in their Biosphere 2 experiment: carbon starvation. Piñon pine trees close the pores in their needle-thin leaves to prevent water loss, a response which also shuts off their access to atmospheric carbon dioxide used for photosynthesis. When the trees' stored carbon is depleted, they die.

"Understanding the mechanism of mortality, and its relationship to temperature, is key to predicting patterns of mortality in future settings," said Huxman, an associate professor of ecology and evolutionary biology. "Without a mechanistic understanding, extrapolation is impossible. Because we understand how carbon starvation plays out, we have the ability to make predictions."

Scientists who have been observing tree mortality in field studies elsewhere also suspect tree death is linked to temperature. They reported earlier this year that background rates of tree mortality have been increasing a few percent per year in older forests across the U.S. west and increasing overall in the Amazon rainforest during recent drought.

The Biosphere 2 experiment strengthens the case and heightens concern because many regions are expected to be become warmer with global climate change.

Biosphere 2 as an Environmental Research Facility

"Two aspects of Biosphere 2 let us tackle this problem in a new way," Huxman said. "First, the excellent temperature control allowed us to simulate effectively different temperature regimes that would be nearly impossible to simulate in the field. Second, the scale of Biosphere 2 allows us to use mature trees with well-developed root systems, not simply seedlings in pots."

A world-renowned engineering marvel, the 7.2-million-cubic-foot Biosphere 2 glass-and-steel dome is famous as the artificial world where eight humans lived for two years, sealed off from Earth, in a privately funded self-sufficiency experiment in the early 1990s. The structure contains recreations of Earth's savanna, desert, ocean and tropical rainforest wilderness.

UA, under the auspices of the College of Science, assumed management of Biosphere 2 in June 2007, when it was awarded a $30 million grant to lease the 34.5-acre Biosphere 2 campus. Educators have since focused on expanding public education programs and exhibits at the major regional attraction. Scientists have focused on using the vast glass-enclosed laboratory to more quickly answer critical, complex questions related to global climate change, water, energy and other environmental challenges.

"The question we asked was not what can we do in Biosphere 2," Breshears said. "The question was, what burning question can Biosphere 2 rapidly help us answer that critically needs to be answered to get a better handle on global change impacts."

International climate scientists who were convened at the request of the United Nations reported in February 2007 that if greenhouse gases accumulate at rates which moderate scenarios project, global climate will be between 3 and 5 degrees Celsius hotter by the year 2100 than it was at the beginning of the Industrial Revolution in the mid-18th century. Global average temperature has risen 0.8 of a degree Celsius since 1750, the panel concluded.

Journal
Proceedings of the National Academy of Sciences
Funder
Biosphere 2 Earthscience, , , , US Department of Agriculture 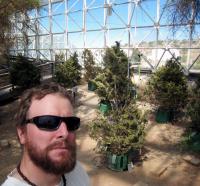 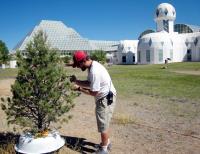