Gustavus Cheyney Doane was a soldier, inventor, author and explorer who felt he should be famous for "discovering" Yellowstone National Park and wealthy from one of his inventions. But neither fame nor wealth came his way. Instead government bureaucracy ignored him, scholarly jealously kept him out of the history books and fate snubbed him on his tombstone.

Now, 114 years after his death, Doane is getting his due in a new book "Yellowstone Denied," by Kim Allen Scott, special collections librarian at Montana State University's Renne Library. Scott will read from his book at 1 p.m. on Saturday, Jan. 27 at the Pioneer Museum in Bozeman, Mont.

A lieutenant in the U.S. Cavalry, Doane provided the military escort for the first official exploration of Yellowstone, the Langford-Washburn expedition of 1870.

"His was the first reliable report on Yellowstone," said Scott. "It was provided to Congress, reprinted and gained a lot of attention."

Doane's report, along with lectures by Nathaniel Langford and others, spurred Congressional interest in creating the park.

"Doane's claim to fame was that he provided a key document that led to the establishment of the world's first national park," Scott said. "He's not a hero, but people who visit the park should know who he is."

Born in 1840, Doane fought in the Civil War as a volunteer. He joined the regular army in 1868, and served until his death in 1892. As an officer in the Second U.S. Cavalry, Doane was there when the bodies of Custer's troops were discovered after the Battle of Little Big Horn. He helped chase Chief Joseph in Montana and Geronimo in Arizona. He led an expedition down the Snake River in 1876-77, and went on the Howgate polar expedition to Greenland in 1880.

"He did all these things, but there was only one thing that he really wanted, wanted more than anything in his whole life," Scott said. "And that was to be recognized as the man who discovered Yellowstone National Park and to be made park superintendent. He was repeatedly denied that position."

Though charismatic and loved by his men, Doane was insubordinate and egotistical.

"He had a sense of entitlement that eclipsed any discretion," Scott said. "When trying to become superintendent, he described himself as the man who 'discovered' the park. He also boasted of his role in the massacre of more than 170 men, women, children at the camp of Heavy Runner on the Marias River."

Doane died in Bozeman in 1892 after influenza brought on pneumonia and heart failure. He was a bitter man at the end. Not only had he failed to achieve acclaim for "discovering" Yellowstone, but the army refused to pay him royalties for a tent he designed or give him a discharge so he could collect a pension after 24 years of service. His 33-year-old widow, Mary, survived him.

In the 1930s, Mary Doane – then in her 70s – met a young, ambitious historian who promised to write her husband's biography if given access to the papers she possessed. That man was Merrill G. Burlingame, one of Montana's most famous historians, a co-founder of the Museum of the Rockies and the namesake of Renne Library's special collections at MSU.

Some 20 years later, at Mary's death in 1952, Burlingame had only published a brief article mentioning Doane. In 1970, amateur historians Orrin and Lorraine Bonnie approached Burlingame for access to Doane's papers for a biography.

Burlingame refused. The Bonnies published a biography of Doane anyway, "Battle Drums and Geysers," which is mostly a transcription of Doane's Yellowstone report.

"The real victim of this wasn't the Bonnies or Burlingame," said Scott. "It was Doane, whose bad luck in life followed him after his death, keeping his story from being told."

It wasn't until 1992, two years before his death, that Burlingame donated his Doane papers to MSU and they finally became accessible to the public. Then in 2000, Scott accidentally came across a previously unknown trove of Doane papers while researching the history of one of Bozeman's most prominent pioneers, Walter Cooper.

Mary had left her papers to her attorney, who had married into the Cooper family. A descendent, Ed Barnett of Chico, Calif., still had Cooper's legal papers as well as Doane's, though Barnett had no idea who Doane was or his importance.

In this collection, Scott found the reciprocal letters between Doane and Mary. He also found an account of Doane's childhood by his brother, George. There was enough to flesh out Doane's life and the times he lived in.

After six years of research and writing, Scott has come to feel that he knows Doane better than himself at times. He occasionally visits Doane's grave in Sunset Hills Cemetery on the east side of Bozeman. It is there, he sees a final irony to Doane's legacy: Cavalry is misspelled.

"There's even a typo on his tombstone," Scott said. "What can you say? It's like fate was against him."

Early explorer of Yellowstone finally gets his due 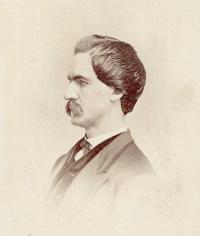 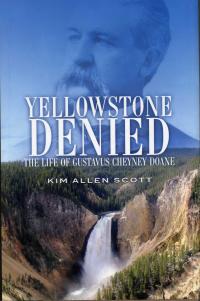