Researchers grew wires from titanium and silicon into a two-dimensional network of branches that resemble flat, rectangular netting, Assistant Professor of Chemistry Professor Dunwei Wang and his team report in the international edition of the German Chemical Society journal Angewandte Chemie.

By creating nanonets, the team conquered a longstanding engineering challenge in nanotechnology: creating a material that is extremely thin yet maintains its complexity, a structural design large or long enough to efficiently transfer an electrical charge.

"We wanted to create a nano structure unlike any other with a relatively large surface area," said Wang. "The goal was to increase surface area and maintain the structural integrity of the material without sacrificing surface area and thereby improving performance."

Tests showed an improved performance in the material's ability to conduct electricity through high quality connections of the nanonet, which suggest the material could lend itself to applications from electronics to energy-harvesting, Wang said. Titanium disilicide (TiSi2) has been proven to absorb light across a wide range of the solar spectrum, is easily obtained, and is inexpensive. Metal silicides are also found in microelectronics devices.

The nanonets grew spontaneously from the bottom-up through simple chemical reactions, unprovoked by a catalyst, according to Wang and co-authors, post doctoral researcher Xiaohua Liu and graduate students Sa Zhou and Yongjing Lin.

Basic nano structures are commonly created in zero or one dimension, such as a dot composed of a small number of atoms. The most complex structures grow in three dimensions – somewhat resembling the branches of a tree. Working in 2D, Wang's team produced a web that under a microscope resembles a tree with all branches growing in the same perpendicular direction from the trunk.

"We're excited to have discovered this unique structure and we are already at work to gauge just how much the nanonet can improve the performance of a material that is already used in electronics and clean energy applications," said Wang.

The full paper can be viewed at http://www3.interscience.wiley.com/cgi-bin/fulltext/121393485/PDFSTART 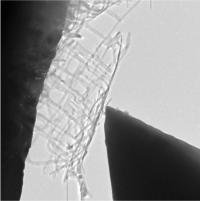 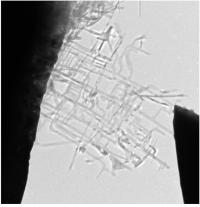