Dr. David Baker, University of Washington (UW) professor of biochemistry and an investigator at the Howard Hughes Medical Research Institute, has been selected to receive the 2008 Raymond & Beverly Sackler International Prize in Biophysics, along with Dr. Martin Gruebele of the University of Illinois, Urbana-Champaign, and Dr. Jonathan Weissman of the University of California, San Francisco.

The field for this year's prize was the physics of structure formation and self-assembly of proteins and nucleic acids. The award will be presented to the three scientists Dec. 15 at Israel's Tel Aviv University.

The prize was established by arts and sciences philanthropists Dr. Raymond R. Sackler and his wife, Beverly Sackler. Raymond Sackler is a psychiatrist and co-founder of a multinational pharmaceutical company.

Baker is being honored for his seminal contributions to computer-based studies of the manner and the speed in which chains of amino acids fold into protein molecules. Anyone who has tried to put together a cardboard box knows the importance of proper folding to get a useful product. The same is true when the body manufactures proteins.

Creating computer models of protein-folding is essential for figuring out how genetic information directs protein formation, how proteins work, and how misfolded, misshapen, and malfunctioning proteins might underlie serious degenerative diseases.

Baker has developed computer programs to predict protein structures from amino acid sequences in DNA. His program, Rosetta, is among the most accurate. He has combined data from nuclear magnetic resonance imaging and X-ray defraction imaging with his computer modeling to more quickly delineate protein molecule structures. He also researches the ways that molecular configurations of proteins determine their functions in biochemical reactions.

In addition, Baker and his team have developed new protein folds and have designed and built functional enzymes, and engineered protein interactions, that previously did not exist in nature. His group has also contributed new ways of studying proteins in membranes -- the thin fatty covering that separates the inside of the cell from the external environment. These transmembrane proteins include molecular channels that permit the flow of calcium into and out of the cell, and that are responsible for the passage of neural impulses and communication between cells. The Baker group was able to apply the Rosetta program to these unusual proteins by treating the membranes as a series of layers with different protein folding requirements.

Baker has involved people of all ages and backgrounds from around the world in helping with protein folding research. People donate their idle computer time to a project called Rosetta@home ( http://boinc.bakerlab.org/rosetta/). The combined computing power of thousands of home computers around the globe (called "distributed computing") allows for lengthy, complicated analysis of the data needed to study how proteins are assembled. Watch a YouTube video on Rosetta@home: http://ie.youtube.com/watch?v=GzATbET3g54

Baker and his team have also created Fold-It, a Web-based protein folding and design game ( http://fold.it/portal/ )for scientists and non-scientists alike to play to study protein formation. Players compete to be the best in the world at folding and designing proteins. More than 20,000 players have downloaded the game. In another aspect of his work, Baker collaborates with scientists at more than 10 universities to continually update and extend the Rosetta program, thereby creating a scientific commons to freely share research data on protein folding.

Baker and his community's discoveries have led to many practical applications in efforts to design new medications and molecular therapies and in other fields that rely on the structural mechanics of proteins. 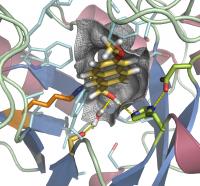