How do you follow a predator so elusive that its nickname is "shadow cat"?

To track secretive jaguars in the forested mountains of Belize, the University of Cincinnati turned to geology and poop.

Brooke Crowley, a UC associate professor of geology and anthropology, can trace the wanderings of animals using isotopes of strontium found in their bones or the bones of animals they have eaten. This method works even with long-dead animals such as ancient mammoths.

Now she and her research partners are applying the technique to jaguar poop, or scat, found in the geologically diverse Mountain Pine Ridge Forest Reserve in Belize.

Claudia Wultsch, a wildlife biologist from the American Museum of Natural History and City University of New York, and Marcella J. Kelly, a professor of wildlife conservation at Virginia Tech, co-authored the study. Both have studied jaguars in Belize for more than a decade.

The research found that jaguar scat provides isotopic signatures similar to those found in the undigested bones of prey to track the big cat's movements across its varied landscape. Researchers examined strontium, carbon and nitrogen isotopes to identify the habitat and geology of prey upon which the jaguars were feeding.

The isotopes get absorbed in the food chain starting with plants that draw in minerals. Strontium then gets absorbed into the tissues and bones of herbivores that eat the plants and finally those of the predators that hunt them.

Strontium can be coupled with carbon isotopes, which reflect the type of vegetation in which an animal resides such as dense forest compared to open grasslands. This combination is particularly powerful for distinguishing where the cats hunt.?

"The Mountain Pine Ridge Forest Reserve is ideally suited for this kind of study because it has diverse geology and vegetation," Crowley said.

The findings suggest that an isotopic analysis of scat can be a powerful research tool for wildlife conservation and management. The study was published in August in the journal Isotopes in Environmental and Health Studies.

Jaguars are the largest big cat in the Western Hemisphere. Like leopards, they have a camouflaged coat with a unique pattern of spots and rosettes. They are opportunistic hunters, catching small birds and rodents or far bigger prey such as caimans, a type of crocodile.

The cats have disappeared from more than 40 percent of their historic range and are red-listed as near-threatened with extinction by the International Union for Conservation of Nature. They are wide-ranging and wary, which makes them difficult to study in the wild.

"You have to be extremely lucky to see one in the wild," Wultsch said.

In this part of Central America, the jaguar's stronghold is la Selva Maya, or the Mayan Forest, which covers parts of Belize, northern Guatemala and southeastern Mexico.

"It represents one of the largest blocks of contiguous forest left in Mesoamerica and is critical for jaguar conservation," Wultsch said.

Even this region has become increasingly fragmented by development over the last 50 years.

"One of the main objectives of our research is to assess how jaguars and other wild cats are doing," Wultsch said.

Researchers have studied jaguars without capturing or handling the animals by setting up remote camera traps and collecting their scat. But isotopic profiling expands the tool box of noninvasive wildlife survey methods, offering a wealth of information from a single scat sample.

The UC study also suggested that jaguars in the reserve were not eating grazing animals such as livestock from area farms.

"Being able to document that isn't happening is reassuring. They're not competing for resources with people in the area," UC's Crowley said.

Finding animal droppings in thick rainforest is not easy, so researchers enlist the help of four-legged field assistants. Wultsch's specially trained dogs have little trouble sniffing out the pungent droppings. The dogs also help researchers collect scat from other wild cats such as pumas, ocelots, margays and jaguarundis that inhabit the reserve.

Wultsch extracted DNA from the samples for a countrywide genetic study of jaguars and other wild cats. She found that despite some habitat fragmentation from human encroachment, jaguars in Belize were maintaining moderate to high genetic diversity. And while jaguars move across most landscapes of Belize, their movement in some protected but geographically isolated areas was limited, the study found.

"Jaguars face habitat loss and fragmentations across most of their range," she said. "Noninvasive monitoring of jaguars using a multidisciplinary approach of isotopes, genetics and camera traps will help us understand how they are responding to environmental change and different human pressures."

Isotopes in Environmental and Health Studies 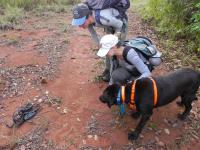