CINCINNATI-- After over a decade of preclinical research and development, a new gene therapy treatment for Sickle Cell Anemia (SCA) is reversing disease symptoms in two adults and showing early potential for transportability to resource-challenged parts of the world where SCA is most common.

Preliminary data from a pilot Phase 1-2 clinical trial testing the gene-addition therapy were presented Dec. 3 at the American Society of Hematology's (ASH) annual meeting in San Diego by principal investigator Punam Malik, MD. She is a physician-scientist at the Cincinnati Children's Cancer and Blood Diseases Institute and director of its Comprehensive Sickle Cell Center. Malik called the data promising.

"One year after treatment of our first patient, and six months after treatment of our second patient, both have seen a remarkable improvement in the quality of life due to remarkable reduction in disease symptoms. This includes near elimination of chronic pain and sickling events and improved anemia," Malik said. "Although it's still early post-treatment, these preliminary results are quite promising. If sustained this therapy will provide a transportable, safe and feasible gene therapy for all SCA patients."

SCA is a painful, inherited disease where blood cells become sickle-shaped and stuck in the vascular system. It can damage vital organs and cause death.

How the Therapy Works

The gene therapy developed by Cincinnati Children's uses a modified gamma globin lentivirus vector to transfer a healthy fetal hemoglobin gene into a patient's blood stem cells (hematopoietic stem cells, HSC). The lentivirus is modified so it does not cause illness.

The therapy comes from the observation that some adults never stop producing fetal hemoglobin (HbF). This prevents red blood cell sickling when sufficient quantities of HbF are present in the body.

Cells are collected earlier from the SCA patient and genetically reprogrammed in a clean lab facility with the modified lentivirus vector. Then the patient's bone marrow is preconditioned with one low-dose of chemotherapy, after which the gene-corrected cells are infused back into the patient. Patients recover their blood counts within a week to 10 days and recover from the chemotherapy effects by two weeks, Malik said.

A key feature of the treatment regimen is the reduced-intensity preconditioning for patients receiving the therapy for SCA. The method is less toxic and expensive than myeloablative preconditioning normally used in bone marrow transplants, according to the researchers.

Myeloablative conditioning uses high-intensity chemotherapy to prepare a transplant patient's bone marrow for healthy gene-corrected blood stem cells (HSCs). This typically results in low blood counts and other side effects. These can include severe infections and long stays in transplant units for one or two months.

This means transplants using myeloablative conditioning have to be performed at large and sophisticated medical centers in developed parts of the world. Malik said this limits access to people in underdeveloped regions where SCA is more common, like Africa, India, the Caribbean and South America.

One goal for Malik and her colleagues is that their therapy's reduced intensity conditioning will allow it to be offered at hospitals in places like Central Africa and other underdeveloped regions of the world.

SCA affects more than 90,000 people in the United States, and millions of people worldwide have the disease, according to the researchers.

Malik said additional data from the study will tell investigators of the consistent and long-term clinical benefit of this therapy to patients with severe SCA. The trial is scheduled to treat up to 10 patients with SCA. Preclinical studies by the research team suggested the treatment allows the body to produce normal red blood cells instead of the sickle-shaped cells that define the inherited disorder.

Both adult patients included in the ASH presentation are 35 and 25 years old who, respectively, had gene transfer therapy 15 and 12 months ago. In the year and a half prior to receiving gene-correction therapy, both patients had more than a dozen acute sickle events per year, according to Malik. These included acute chest and pain crises, chronic pain, and required the ongoing use of oral or injectable opioids on a regular basis.

In an effort to accelerate the development of the therapy, Cincinnati Children's has partnered with Roivant Sciences to create Aruvant Sciences. The joint venture is focused on developing and commercializing innovative therapies for hematological conditions. Aruvant's lead candidate is RVT-1801, the gene therapy used to treat both patients in Malik's ASH presentation of early clinical trial data. Aruvant Sciences will be based in Cincinnati. Additional information can be found here. 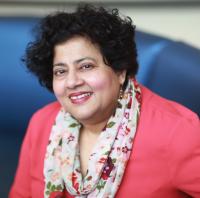