Stanford, CA-- Once a mother plant releases its embryos to the outside world, they have to survive on their own without family protection. To ensure successful colonization by these vulnerable creatures, the mother plant provides the embryo with a backpack full of energy, called the endosperm. Since, over time, the only plants that will survive are those that reproduce and compete successfully, the mother plant's whole life is dedicated to producing sugars in its leaves, which are ultimately stored in these backpacks. The sugars are manufactured in the leaves when the plant turns the Sun's energy into chemical energy and then transported to the seeds. The amount of sugars that fill a seed directly determines the seed's size.

A team of scientists led by Carnegie's Wolf Frommer has now discovered that a sugar-transport protein in maize and rice called SWEET4 is both necessary for successful seed filling and shows genome changes that indicate domestication by humans. The new research is published in Nature Genetics.

The plant endosperm has been an important factor in the establishment of a mutualistic relationship with humans-to facilitate their survival and spread, crop plants have evolved larger backpacks to ensure continued utility to humans. Without knowing which gene variants were contributing useful properties, people simply selected the best plants for continued cultivation, in this case choosing plants that had large backpacks. This is human-driven evolutionary selection, which happened with all of our crop plants as wild plants were converted into more and more useful and nutritious versions.

Now, using modern molecular genetic methods, scientists can see which gene variants were in fact being selected during this process, and SWEET4 was among them. The ancestors of the modern maize planted today across large acreages in the U.S. and worldwide had much smaller endosperms. It is thought that seed sizes, for many types of grains, were increased by the selective pressures of agricultural domestication. Larger, more sugar-filled seeds such as maize kernels were more attractive to human cultivators, due to their nutritive value and their ability to produce sturdier seedlings. But a direct link between the biochemistry of the seed-filling processes and domestication had long remained elusive.

Frommer and his lab have worked extensively on the family of SWEET sugar transporters, which play several key roles in plants, including producing nectar and transporting sugars from the leaves to other tissues. They also discovered that SWEETs make plants susceptible to hijacking by pathogens that steal plant's energy supplies before they can be transported to the seeds.

How was this remarkable new discovery made? Several labs contributed.

Frommer's team analyzed maize genes involved in sugar-related processes to find ones that were "turned on" during seed development. They found 16 candidates, and among them one was clearly outstanding. The gene SWEET4c, which encodes a sugar transporter protein in maize, was shown to be specifically expressed in the maize seed by the group of Prem Chourey at University of Florida, and had evidence of selection due to domestication.

The evidence that the SWEET4c gene was selected during domestication was discovered by the team of Jeff Ross-Ibarra at UC Davis, while comparing SWEET4 sequences from modern maize against its wild ancestor Teosinte. If variation of the sequence of a specific gene is greatly reduced in modern versions, this is considered a sign that it was shaped by the selective pressures of domestication.

The team found that SWEET4c becomes highly active--which means it is producing SWEET4c protein--right at the time when import of sugars into a seed is maximal, between 10 and 17 days after the seed is pollinated.

"We believe that as early farmers selected larger seeds to eat and plant, they unconsciously selected for increased sugar import into these seeds by SWEET4c" Carnegie's Davide Sosso, the lead author of this study, explained. "This is because seeds that contained more sugars were larger and more nutritious."

A major breakthrough of this study was the finding that SWEET4c is absolutely essential for seeds to be filled. Without a working version of the gene encoding SWEET4c, such as in the mutant lines provided by the UniformMu resource (Don McCarty and Karen Koch at the University of Florida), sugars were not delivered to the seeds and the backpack was empty (in science jargon: empty pericarp).

Gratifyingly, the importance of the study goes beyond maize yield. The authors found that the corresponding gene in rice was also critical for seed filling and showed independent signs of selection by farmers and breeders.

"Our work indicates that SWEET4 could be a promising target for engineering varieties of maize, rice and other crops," said Bing Yang from Iowa State University, whose team performed all the rice studies.

When scientists develop a new drug, they need to work with the pharmaceutical industry to perform extensive tests to ultimately bring it to the consumers. Similarly plant scientists need to work with industry to explore the full potential of a discovery. The team has thus initiated a collaboration with Syngenta AG to find ways to increase crop yield by engineering sugar transport processes, which despite their importance are only poorly understood at present. 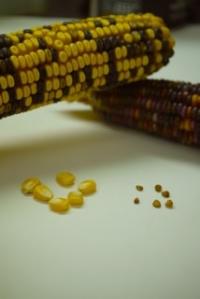