Tropical Storm Odile continues to spread moisture and generate strong thunderstorms with heavy rainfall over northern Mexico's mainland and the Baja California as well as the southwestern U.S. NASA's Tropical Rainfall Measuring Mission or TRMM satellite measured rainfall rates from space as it passed over Odile.

Odile had weakened to a tropical storm with winds of about 55 knots (63.3 mph) when the TRMM satellite flew over on September 16, 2014 at 0917 UTC (2:19 a.m. PDT). Odile was still well organized and TRMM's Precipitation Radar (PR) measured rain falling at a rate of almost 130 mm (5.1 inches) per hour northeast of the tropical storm's center of circulation. The tops of some strong thunderstorms over the Gulf of California were reaching heights of 13km (8 miles).

On Sept. 17, Odile is weakening as it moves slowly northeastward across the northern Gulf of California while dropping heavy rainfall over portions of northwestern Mexico and the southwestern United States. A Tropical Storm Warning remained in effect for mainland Mexico from Bahia Kino to Puerto Penasco.

At 11 a.m. EDT on Sept. 17, the center of Tropical Storm Odile was located near latitude 30.6 north and longitude 113.3 west, about 50 miles (85 km) south-southeast of Puerto Penasco, Mexico. Odile is moving toward the northeast near 6 mph (9 kph). On the forecast track the center of Odile is moving into northwestern mainland Mexico. Maximum sustained winds are near 40 mph (65 kph) and rapid weakening is expected as Odile moves over the mainland.

Tropical storm-force winds and heavy amounts of rainfall have been recorded today, Sept. 17. The National Hurricane Center noted that a wind gust to 41 mph (66 kph) was reported at Caborca in the Mexican state of Sonora during the morning hours. A rainfall total of 2.57 inches (62 mm) was observed at Caborca, Mexico.

The heavy rain that TRMM was measuring is expected to continue as Odile tracks slowly over mainland Mexico. Moisture ahead of Odile is expected to produce rainfall amounts of 3 to 6 inches with isolated totals of 9 inches across southeastern Arizona and southwestern New Mexico, possibly extending into western Texas through Friday, September 19. 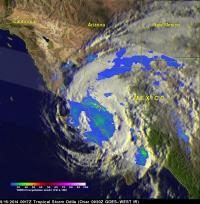