The findings can benefit patient health and advance radiation therapy used to treat cancer and other diseases, said John M. Tomich, a professor of biochemistry and molecular biophysics who is affiliated with the university's Johnson Cancer Research Center.

Tomich conducted the study with Ekaterina Dadachova, a radiochemistry specialist at Albert Einstein College of Medicine in New York, along with researchers from his group at Kansas State University, the University of Kansas, Jikei University School of Medicine in Japan and the Institute for Transuranium Elements in Germany. They recently published their findings in the study "Branched Amphiphilic Peptide Capsules: Cellular Uptake and Retention of Encapsulated Solutes," which appears in the scientific journal Biochimica et Biophysica Acta.

The study looks at the ability of nontoxic molecules to store and deliver potentially harmful alpha emitting radioisotopes — one of the most effective forms of radiation therapy.

In 2012, Tomich and his research lab team combined two related sequences of amino acids to form a very small, hollow nanocapsule similar to a bubble.

"We found that the two sequences come together to form a thin membrane that assembled into little spheres, which we call capsules," Tomich said. "While other vesicles have been created from lipids, most are much less stable and break down. Ours are like stones, though. They're incredibly stable and are not destroyed by cells in the body."

The ability of the capsules to stay intact with the isotope inside and remain undetected by the body's clearance systems prompted Tomich to investigate using the capsules as unbreakable storage containers that can be used for biomedical research, particularly in radiation therapies.

"The problem with current alpha-particle radiation therapies used to treat cancer is that they lead to the release of nontargeted radioactive daughter ions into the body," Tomich said. "Radioactive atoms break down to form new atoms, called daughter ions, with the release of some form of energy or energetic particles. Alpha emitters give off an energetic particle that comes off at nearly the speed of light."

These particles are like a car careening on ice, Tomich said. They are very powerful but can only travel a short distance. On collision, the alpha particle destroys DNA and whatever vital cellular components are in its path. Similarly, the daughter ions recoil with high energy on ejection of the alpha particle — similar to how a gun recoils as it is fired. The daughter ions have enough energy to escape the targeting and containment molecules that currently are in use.

"Once freed, the daughter isotopes can end up in places you don't want them, like bone marrow, which can then lead to leukemia and new challenges," Tomich said. "We don't want any stray isotopes because they can harm the body. The trick is to get the radioactive isotopes into and contained in just diseases cells where they can work their magic."

The radioactive compound that the team works with is 225Actinium, which on decay releases four alpha particles and numerous daughter ions.

Tomich and Dadachova tested the retention and biodistribution of alpha-emitting particles trapped inside the peptide capsules in cells. The capsules readily enter cells. Once inside, they migrate to a position alongside the nucleus, where the DNA is.

Tomich and Dadachova found that as the alpha particle-emitting isotopes decayed, the recoiled daughter ion collides with the capsule walls and essentially bounces off them and remains trapped inside the capsule. This completely blocked the release of the daughter ions, which prevented uptake in certain nontarget tissues and protected the subject from harmful radiation that would have otherwise have been releases into the body.

Tomich said that more studies are needed to add target molecules to the surface of the capsules. He anticipates that this new approach will provide a safer option for treating tumors with radiation therapy by reducing the amount of radioisotope required for killing the cancer cells and reducing the side effects caused by off-target accumulation of the radioisotopes.

"These capsules are easy to make and easy to work with," Tomich said. "I think we're just scratching the surface of what we can do with them to improve human health and nanomaterials." 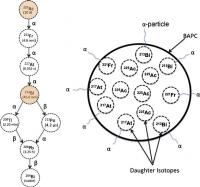