A tropical low pressure area known as System 92B has been organizing in the Northern Indian Ocean's Bay of Bengal and NASA's TRMM satellite has shown strong thunderstorms and heavy rainfall in the developing storm.

The Tropical Rainfall Measuring Mission or TRMM satellite passed over System 92B on May 19 and 20 and captured data on System 92B's rainfall rates and cloud heights.

At NASA's Goddard Space Flight Center in Greenbelt, Maryland, TRMM PR data were used to create a 3-D image that showed a simulated view of the tropical disturbance's rainfall structure. In the 3-D image, tall storms were shown reaching heights of over 14km (about 8.7 miles) and returning reflectivity values of over 52dBZ to the satellite.

TRMM had another fairly good look at 92B on May 20 at 1000 UTC (6:00 a.m. EDT). TRMM's Microwave Imager (TMI) had a better view than the PR instrument that flew over the northern edge of 92B. TMI showed that 92B was better organized than previously and estimated that rain was falling at a rate of over 33.8 mm (1.3 inches) per hour in some areas.

The Joint Typhoon Warning Center or JTWC noted that a microwave image from Europe's METOP-B satellite on May 21 at 04:54 UTC (12:54 a.m. EDT) showed that the bulk of strong thunderstorms and deep convection in System 92B was over the storm's southern quadrant and wrapping into the low-level center.

On May 21 at 07:30 UTC/3:30 a.m. EDT the JTWC gave System 92B a high chance for development. At that time the center of circulation was near 16.1 north latitude and 91.4 east longitude, about 375 nautical miles south of Chittagong, Bangladesh.

Another instrument on METOP-B looked at the developing storm's winds. The prime objective of Advanced SCATterometer (ASCAT) is to measure wind speed and direction over the oceans. An image from ASCAT on May 21 at 03:57 UTC showed that the circulation of 92B appeared elongated, with 35 to 40 knot winds over the southwestern quadrant and weaker winds (15 to 20 knots) over the northern semi-cicle.

JTWC noted that the warm sea surface temperatures in the area will help with development. 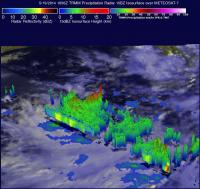 TRMM Simulated Flyby of System 92B