When magnetic materials are nanometric at least in one dimension, the surface effect often dominates the static and transport behaviors due to the limited long-range order and broken translation symmetry. The perturbations in spin-spin correlation length and unperfect spin coordination structures make low-dimensional magnetic materials an ideal platform for exploring magnetism in reduced dimensions. Low dimension materials, especially those in two-dimensional (2D) pose a conceptual flatland for mechanically flexible, engineerable and biocompatible devices with complex functionalities via a patterning or assembling manner to integrated objects.

As a typical two sublattice antiferromagnetic order, rutile-type fluorides MF2 (M=Mn, Fe, and Co) are proven very useful in the context of antiferromagnetic spintronics, especially in the THz range with optical manipulation. However, it remains a challenge to initiate and sustain the solution processability of fluorides in a predictable, controlled and deterministic manner, leaving some instructive information unclarified, such as how the size effect matters, and how the subtle interplay between the surface spin arrangement and phase transitions operates.

'According to the calculation results, a preferential capping on (001) facet is found in all the evaluated molecules, revealing that the growth direction of the c-axis is impeded. Besides, the asymmetric adsorption of {110} facets with subsequent blocking serves as the origin of rod formation in a direction perpendicular to (110) or (1-10) facet when OAc, OAm and OAl molecules are used.' they declare.

'The experimental results are in good agreement with theoretical predictions, where FeF2 nanocrystals with well-defined crystalline orientations are obtained.' the authors add.

'A cluster spin-glass like surface layer is identified from the disrupted translation symmetry at the surface, which exerts a pinned FM moment upon the AFM core. Anomalous positive exchange bias HE and enhanced magnetic phase transition temperature are observed due to the interactions between pinned FM moments and the associated structural order parameters, which is qualified within the framework of Landau theory.' the researchers state.

'These high-quality fluorides nanocrystals are strong candidates for flexible antiferromagnetic devices and sensors.' they add.

'Moreover, we believe that this approach of anisotropic direction of growing process will pave the way to the solution synthesis of other low-dimensional halide nanocrystals for emerging spintronics, such as the 2D FeCl2 and CrI3.' the researchers predict.

This research received funding from the National Key R&D Program of China, the National Natural Science Foundation of China and the Shenzhen Science and Technology Project. 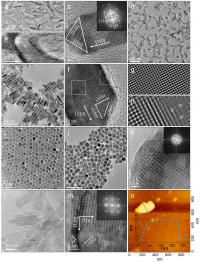