Just in time for Valentine's Day, botanists from Hawai'i have discovered a new species of plant with small heart-shaped fruits. The new species is a member of the coffee family (Rubiaceae) and part of the genus Coprosma, which occurs across many remote islands of the Pacific Ocean. They named the new Hawaiian species after the symbol of love - calling it Coprosma cordicarpa - meaning the Coprosma with heart-shaped fruit. Their research is published in the open-access journal PhytoKeys.

The botanists, who discovered C. cordicarpa, describe their finding as the result of a loving adventure with Hawaiian biodiversity. It began when Hawai'i's State Botanist Dr. Maggie J. Sporck-Koehler noticed the little heart-shaped fruits in the Kanaio Natural Area Reserve on the Island of Maui, while attending a work meeting with the Department of Land and Natural Resources (DLNR), Division of Forestry and Wildlife (DOFAW).

One of the primary mandates of DOFAW is to conserve Hawai'i's native ecosystems and the species that reside in them. As State Botanist, Sporck-Koehler is most often working on issues relating to rare or State and Federally listed threatened and endangered (T&E) plant species. Gaining a better understanding of native Hawaiian plant conservation status and helping to facilitate conservation efforts is one of the main objectives of the work she does for the State. Therefore, when something extraordinary gets under her nose, such as an unusual Coprosma population, she takes a note and a sample.

Sporck-Koehler attempted to identify the species using a key so that she could know what she was looking at. She got to Coprosma foliosa, but was not satisfied. So, she turned to Dr. Jason T. Cantley, who at the time was finishing his PhD research on the genus Coprosma at the University of Hawai'i at Manoa Department of Botany. "I was very taken with it," Sporck-Koehler told Cantley. "It seemed different than any other [Coprosma] foliosas I've seen."

Then, Cantley concluded that the heart-shaped fruits and other characteristics looked different enough that it was worth it to visit specimens at the Bernice Pauahi Bishop Museum in Honolulu, and then to examine the plants themselves. "We needed to get all our ducks in a row, making sure we knew what we were looking for before we flew to Maui," Cantley says. "Part of that planning was to think about the long-term conservation of Coprosma cordicarpa from the start. That's one reason it was necessary to bring Dr. Chau into this project."

Dr. Marian M. Chau is the Seed Conservation Laboratory Manager at Lyon Arboretum's Hawaiian Rare Plant Program in Honolulu. The Seed Conservation Lab's mission is to aid in the prevention of extinction of Hawaiian plant species by maintaining a long-term seed bank collection, to propagate plants for use in approved restoration projects, and to conduct research on seed storage and germination for the Hawaiian flora. The Seed Conservation Lab currently stores over 11 million seeds from about 40% of all Hawaiian native species, with the ultimate goal to represent the entire flora with research and/or long-term germplasm collections. This includes under-described biodiversity, like the heart-shaped fruits of C. cordicarpa.

From early on, it was clear that C. cordicarpa was not all that common, as it can only be found on one island. In fact, the botanists determined the new species fell within the International Union for Conservation of Nature (IUCN) Red Vulnerable Category (VU) for extinction risk. The VU is the lowest of the three threatened Red List categories, but indicates that C. cordicarpa still faces threats of extinction in the wild. Chau suggested that they collect seeds for long-term germplasm storage at the Seed Conservation Lab.

Two field adventures on Maui and many herbarium specimen measurements later, the authors were confident they were looking at a new species. All in all, 609 seeds from 32 plants were collected, which are going to help preserve the biodiversity of this species for many years to come.

The authors had a passion for Hawaiian plant biodiversity and conservation well before this project, but it was the discovery of the heart-shaped fruits that brought these three botanists together. With their naming of this new species, they hope to also inspire others with a love for biodiversity that will continue long into the future. 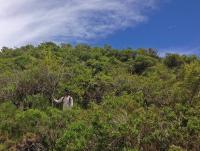