WASHINGTON (Sept. 18, 2017)-- An international team of scientists have made a breakthrough in understanding how genetics and evolution work in concert to shape biodiversity by investigating the complex color patterns of butterfly wings.

Dr. Arnaud Martin, an assistant professor of biology in the George Washington University's Columbian College of Arts and Sciences, used CRISPR gene-editing technology to study the role of the WntA gene in formation of shapes and colors on butterfly wings -- and how they diversify.

"We know why butterflies have beautiful colored patterns. It's usually for sexual selection, for finding a mate or it's some kind of adaptation to protect themselves from predators," Dr. Martin said. "What is more mysterious is how do they do it. How do you make stripes and dots, how do you make complexity, how do you fine-tune a given feature during long evolutionary time scales?"

One of the biggest gaps in biological knowledge is the inability to predict what an organism will look like or how it might behave based on its genes and environment. The National Science Foundation calls these mechanisms the "rules of life," and this research is a step toward the goal of establishing some of these rules by revealing how a single gene has influenced the wing patterns of multiple butterfly species.

In the recently published study, Dr. Martin and collaborators looked at how WntA, a "painting gene" identified as a master gene for color pattern evolution, could evolve to modulate the features of different species. Researchers believed the gene was important for laying out the basic organization of the wing and decided to test this idea by removing the gene in seven butterfly species to observe the impact on the butterfly's wing pattern development.

Using CRISPR, a tool that cuts DNA at any desired site in the genome, scientists were able to inactivate the WntA gene and follow the resulting development of colored motifs in the wing from caterpillar through adulthood. The results have been fascinating, Dr. Martin said. The wing patterns changed in significant ways with color changes and trademark patterns altered.

"CRISPR allowed us to not only describe that this gene has evolved multiple roles within a single species, it also enabled a massive comparison between species and showed that pattern evolution has consisted of variations on a common theme," Dr. Martin said.

There are more than 20,000 distinct species of butterflies in the world today, all distinguishable by the colors and patterns on the wing. Unlocking what causes these differences could be a key to understanding biodiversity and establishing some aspects of the rules of life.

While Dr. Martin's work focuses on butterfly diversity, this branch of genetic research has major implications for studying all types of organisms -- including humans.

"Our research is very fundamental, and it's about trying to understand where we come from and how," he said. "In a way, a butterfly wing starts as a blank canvas where patches of cells develop for a specific purpose, and we have that in our own anatomy. If you look at the brain, to make very complicated brains you've got to make patterns. We don't really know how all these patterns develop. That's where butterflies come in."

Images and Video Available Upon Request 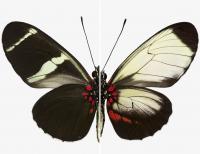 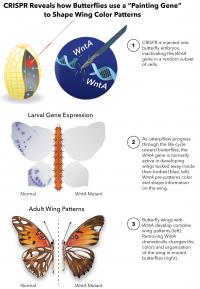