Male nursery web spiders (Pisaura mirabilis) prepare silk-wrapped gifts to give to potential mates. Most gifts contain insects, but some gifts are inedible plant seeds or empty exoskeletons left after the prey has already been eaten (presumably by the male himself!). Males will also 'play dead' if a female moves away and then attempt to re-establish mating. New research published in BioMed Central's open access journal BMC Evolutionary Biology examines the reproductive success of deceitful males and shows that females are not impressed by worthless gifts.

Male spiders were provided with either a potential gift of a fly, or a worthless item, such as a cotton wool ball, a dry flower head, a prey leftover (previously eaten housefly), or no gift at all. All the gifts were approximately the same size, so the females would not be able to tell what the gift was without unwrapping it. Males that offered any gift were more likely to successfully mate than males without. However the length of time the females allowed males with worthless gifts to spend transferring sperm was shorter than those with edible gifts (and even shorter for those with no gift at all!).

It appears that both male and female spiders are apparently able to assess the value of the gift and modify their behavior accordingly. Not only did the female spiders end mating sooner with an inedible gift, but male death feigning (thanatosis), which is triggered by the female attempting to end mating and run away with the gift, occurred in half of the matings involving an edible gift, but only once with a worthless gift. Similarly males and females were sometimes seen fighting over edible gifts, but never for a worthless gift.

Maria Albo who led the research explained, "The evolution of male deceit involves a complex equation of costs and benefits. It costs the males to find and wrap a gift, but these costs can be reduced if the male does not have to first catch his gift, or gives one that has already been eaten. The benefit of the gift is longer mating, which leads to more sperm being transferred, and potentially a higher number of offspring. However, the females are wise to deception and terminate mating early for worthless gifts."

She continued, "The final results show that the number of eggs hatching was lower if the female had not received a gift, but there was little difference between females who had received an edible or inedible gift. The success of cheating probably explains why both strategies have co-evolved and are maintained in the population."

Article citation and URL available on request at press@biomedcentral.com on the day of publication.

2. BMC Evolutionary Biology is an Open Access, peer-reviewed online journal that considers articles on all aspects of molecular and non-molecular evolution of all organisms, as well as phylogenetics and palaeontology.

3. BioMed Central (http://www.biomedcentral.com/) is an STM (Science, Technology and Medicine) publisher which has pioneered the open access publishing model. All peer-reviewed research articles published by BioMed Central are made immediately and freely accessible online, and are licensed to allow redistribution and reuse. BioMed Central is part of Springer Science+Business Media, a leading global publisher in the STM sector.

Are you looking for a way to save money on auto insurance? We've taken the mystery out of this confusing subject by outlining 10 simple steps to saving money while getting the best coverage for yourself and your car. Welcome:
Auto Insurance reviews

Paying for sex and 'playing dead' - the deceitful gift-giving spider 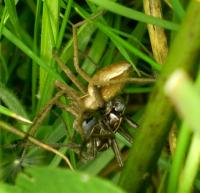