Do freshwater snails make good tennis players? One of them certainly has the name for it.

Slovak biospeleologist Jozef Grego and Montenegrin zoologist Vladimir Pesic of the University of Montenegro discovered the new snail in a karstic spring near Podgorica, the capital of Montenegro, during a field trip in April 2019. Their scientific article, published in the open-access, peer-reviewed journal Subterranean Biology, says they named it after Djokovic "to acknowledge his inspiring enthusiasm and energy."

"To discover some of the world's rarest animals that inhabit the unique underground habitats of the Dinaric karst, to reach inaccessible cave and spring habitats and for the restless work during processing of the collected material, you need Novak's energy and enthusiasm," the researchers explain.

T. djokovici has a milky-white shell in the shape of an elongated cone and is adapted to live in the underground habitats of the Dinaric karst. It is part of Hydrobiidae, a very diverse family of small to tiny snails - also known as mud snails - inhabiting fresh or brackish water, including caves and subterranean habitats.

This is the first member of the genus Travunijana so far to be discovered in the Skadar Lake basin, and the only one found outside of the Trebisnjica river basin in Herzegovina, which points to the enigmatic distributional range of these snails across the Dinaric underground habitats. Where they came from, and how, remains a mystery.

Because of its small area of occupancy, T. djokovici is assessed as Vulnerable, according to the IUCN Red List of Threatened Species. Subterranean ecosystems, the authors of the new species emphasise, are extremely vulnerable to human-driven environmental changes, and, being obscure, they're often overlooked during conservation efforts. 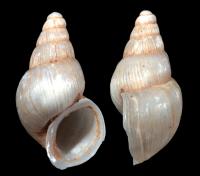