Nagoya, Japan, 20 October 2010– The economic importance of the world's natural assets is now firmly on the political radar as a result of an international assessment showcasing the enormous economic value of forests, freshwater, soils and coral reefs, as well as the social and economic costs of their loss, was the conclusion of The Economics of Ecosystems and Biodiversity (TEEB) report launched today by TEEB study leader, Pavan Sukhdev.

"TEEB has documented not only the multi-trillion dollar importance to the global economy of the natural world, but the kinds of policy-shifts and smart market mechanisms that can embed fresh thinking in a world beset by a rising raft of multiple challenges. The good news is that many communities and countries are already seeing the potential of incorporating the value of nature into decision-making," said Mr. Sukhdev, a banker who heads up the Green Economy Initiative of the United Nations Environment Programme (UNEP).

He was speaking at the launch of the two-year study, which has involved hundreds of experts from around the world, at the Convention on Biological Diversity's 10th Conference of Parties meeting (CBD COP10) in Nagoya.

The TEEB study calls for wider recognition of nature's contribution to human livelihoods, health, security, and culture by decision-makers at all levels (local to national and business to citizens). It promotes the demonstration, and where appropriate, the capture of the economic values of nature's services through an array of policy instruments and mechanisms.

Countries such as India have already announced plans for implementing the economic valuation of their natural capital as well as the value of nature's services in decision-making.

"TEEB's approach can reset the economic compass and herald a new era in which the value of nature's services is made visible and becomes an explicit part of policy and business decision-making. Do nothing, and not only do we lose trillions worth of current and future benefits to society, we also further impoverish the poor and put future generations at risk," said Mr. Sukhdev.

"The time for ignoring biodiversity and persisting with conventional thinking regarding wealth creation and development is over. We must get on to the path towards a green economy," he added.

Nature is crucial to prosperity and development

In TEEB's final report, "Mainstreaming the Economics of Nature", there are three scenarios: a natural ecosystem (forests), a human settlement (city), and a business sector (mining), to illustrate how the economic concepts and tools described in TEEB can help equip society with the means to incorporate the values of nature into decision-making at all levels.

With more than half of the human population now living in urban areas, cities have a crucial role to play in acknowledging the natural capital required to maintain and improve the well-being of their residents. Innovative economic instruments and policies are emerging that reward good practice. For example, the Japanese city of Nagoya (host to the COP-10 meeting), has implemented a new system of tradeable development rights whereby developers wishing to exceed existing limits on high-rise buildings can offset their impacts by buying and conserving areas of Japan's traditional agricultural landscape. Discounts on bank loans for buildings that receive a higher 'star rating' based on a green certification system designed by city authorities also create incentives for more green space within city projects.

An important finding of many studies reviewed by TEEB is the contribution of forests and other ecosystems to the livelihoods of poor rural households, and therefore the significant potential for conservation efforts to contribute to poverty reduction. It has been estimated that ecosystem services and other non-marketed natural goods account for 47 to 89 per cent of the so-called 'GDP of the Poor' (i.e. the effective GDP or total sources of livelihoods of rural and forest-dwelling poor households) in some large developing countries.

"In the past only traditional sectors such as manufacturing, mining, retailing, construction and energy generation were uppermost in the minds of economic planners and ministers of finance, development and trade. TEEB has brought to the world's attention that nature's goods and services are equal, if not far more central, to the wealth of nations including the poor--a fact that will be increasingly the case on a planet of finite resources with a population set to rise to nine billion people by 2050," said Achim Steiner, UN Under-Secretary General and UNEP Executive Director.

The report also drives home the message that failure of business to account for the value of natural capital, particularly in sectors such as mining, can pose significant business and social risks. The UK-based consultancy, TruCost, estimated that the negative impacts, or 'environmental externalities', of the world's top 3,000 listed companies totals around US$ 2.2 trillion annually.

Approaches such as Net Positive Impact, wetland mitigation and bio-banking can help ensure that developers take responsibility for their environmental footprint. As consumers and governments opt for greener purchasing choices the business sector also stands to make considerable gains: by 2020 the annual market size for certified agricultural products is expected to be US$210 billion; payments for water related ecosystem services US$6 billion; and voluntary biodiversity offsets in the region of US$100 million a year.

Countries give nature the green light

"TEEB aims to provide strong incentives for countries to ensure decisions are not solely based on short-term gains, but build foundations for sustainable and inclusive development. India is planning a TEEB for India study to assess its natural capital. We are committed to developing a framework for green national accounts that we can implement by 2015, and we are confident that the TEEB for India Study will be the key facilitator for the same," said Mr. Ramesh.

The European Commission and Germany saw the benefits of the TEEB study at the Potsdam G8+5 Environment Ministers meeting in 2007 and applauded its conclusions.

"The European Commission has supported the project from the start and will continue to work on these issues after COP 10, taking into account the decisions that will be adopted in Nagoya. We intend to launch a study to examine more in detail the evidence available in an EU context and areas for implementation of the analyses developed by TEEB in our policies. The Commission is also willing to support initiatives by other countries, in particular developing countries, to demonstrate the benefits and costs of investing in the management of biodiversity and ecosystem services. Notably, we plan to work in partnership with UNDP for supporting assessments in interested developing countries and making the links with economic sectors and development plans," said Janez Potočnik, European Commissioner for the Environment.

Japan, the host country of the 10th Conference of Parties meeting on the Convention of Biological Diversity (CBD COP10), also welcomed the study.

"The Japanese Government has contributed to the TEEB study, and has conducted research on economic evaluation and policy responses on Japan's biodiversity in close cooperation with TEEB. Japan welcomes the launching of TEEB at Aichi-Nagoya, Japan, in the International Year for Biodiversity. We expect the TEEB study will deliver significant impacts on global biodiversity policy. To support this new approach, Japan, as COP10 presidency, would like to proactively contribute to national, regional and global initiatives to implement aspects of the TEEB study," said Mr. Hideki Minamikawa, Vice-Minister for Global Environmental Affairs in the Ministry of the Environment Japan.

The TEEB study concludes with the following recommendations:

It is envisaged that the TEEB study will continue with ongoing work on outreach and capacity building. The TEEB reports are available at www.teebweb.org.

In addition to the launch of the final synthesis Mainstreaming the Economics of Nature, TEEB Ecological and Economic Foundations is published today by Earthscan. The volume synthesizes state-of-the-art knowledge on a range of issues that are central to applying economic valuation to ecosystem services and biodiversity. A further three volumes based on the TEEB reports will be published by Earthscan over the next 15 months.

TEEB is an independent study, led by Pavan Sukhdev, hosted by the United Nations Environment Programme (UNEP), with financial support from the European Commission, Germany, UK, the Netherlands, Norway, Belgium, Sweden and Japan.

The annual loss of opportunity due to the current over-exploitation of global fisheries. Competition between highly subsidized industrial fishing fleets coupled with poor regulation and weak enforcement of existing rules has led to over-exploitation of most commercially valuable fish stocks, reducing the income from global marine fisheries by US$50 billion annually, compared to a more sustainable fishing scenario (World Bank and FAO 2009).

Insect pollinators are nature's multi-billion dollar providers. For 2005 the total economic value of insect pollination was estimated at Euros 153 billion. This represents 9.5% of world agricultural output for human food in 2005. (Gallai et al. 2009)

The benefits of tree planting in the city of Canberra. Local authorities in Canberra, Australia, have planted 400,000 trees to regulate microclimate, reduce pollution and thereby improve urban air quality, reduce energy costs for air conditioning as well as store and sequester carbon. These benefits are expected to amount to some US$20-US$67 million over the period 2008-2012, in terms of the value generated or savings realized for the city. (Brack 2002)

The amount saved by New York, by investing in payments to maintain natural water purification services in the Catskills watershed (US$1-US$1.5 billion) rather than opt for the man-made solution of a filtration plant (US$ 6-8 billion plus US$300-500 million/year operating costs). (Perrot-Maitre and Davis 2001).

The number of (rupees) millionaires in Hiware Bazaar, India, as the result of regenerating 70 hectares of degraded forests. This led to the number of active wells in the surrounding area doubling, grass production increasing and income from agriculture increasing due to the enhancement of local ecosystem services (a TEEB case mainly based on Neha Sakhuja). 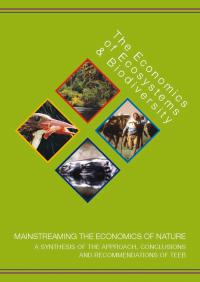