Maunakea, Hawaii - Thanks to lucky snapshots taken by an amateur astronomer in Argentina, scientists have obtained their first view of the initial burst of light from the explosion of a massive star.

To date, no one has been able to capture the "first optical light" from a normal supernova (one not associated with a gamma-ray or x-ray burst), since stars explode seemingly at random in the sky and the light from shock breakout is fleeting. The new data provide important clues to the physical structure of the star just before its catastrophic demise and to the nature of the explosion itself.

The discovery and results of follow-up observations from around the world will be published in the Feb. 22 issue of the journal Nature (and published online on Feb. 21).

Astronomer Melina Bersten and her colleagues at the Instituto de Astrofísica de La Plata in Argentina soon learned of the serendipitous discovery and realized that Buso had caught a rare event, part of the first hour after light emerges from a massive exploding star.

She estimated Buso's chances of such a discovery, his first supernova, at one in 10 million or perhaps even as low as one in 100 million.

Filippenko and his colleagues obtained a series of seven spectra, where the light is broken up into its component colors, as in a rainbow, with the Shane 3-meter telescope at the University of California's Lick Observatory near San Jose, California.

The data allowed the international team to determine that the explosion was a Type IIb supernova: the explosion of a massive star that had previously lost most of its hydrogen envelope, a species of exploding star first observationally identified by Filippenko in 1987.

Combining the data with theoretical models, the team estimated that the initial mass of the star was about 20 times the mass of our sun, though it lost most of its mass, probably to a companion star, and slimmed down to about five solar masses prior to exploding.

"The Lick spectra, obtained with just a 3-meter telescope, are of outstanding quality in part because of a recent major upgrade to the Kast spectrograph, made possible by the Heising- Simons Foundation as well as William and Marina Kast," Filippenko said.

Filippenko's group, which included numerous undergraduate students, is supported by the Christopher R. Redlich Fund, Gary and Cynthia Bengier, the TABASGO Foundation, the Sylvia and Jim Katzman Foundation, many individual donors, the Miller Institute for Basic Research in Science and NASA through the Space Telescope Science Institute. Research at Lick Observatory is partially supported by a generous gift from Google.

The Low Resolution Imaging Spectrometer (LRIS) is a faint-light instrument capable of taking spectra and images of the most distant known objects in the universe. The instrument is equipped with a red arm and a blue arm to explore stellar populations of distant galaxies, active galactic nuclei, galactic clusters, and quasars. LRIS was used in observing distant supernovae by astronomers who received the Nobel Prize in Physics in 2011 for research determining that the universe was speeding up in its expansion. Support for LRIS was generously provided by Friends of Keck, including Change Happens Foundation and Mt. Cuba Astronomical Foundation.

The DEep Imaging and Multi-Object Spectrograph (DEIMOS) boasts the largest field of view (16.7arcmin by 5 arcmin) of any of the Keck Observatory instruments, and the largest number of pixels (64 Mpix). It is used primarily in its multi-object mode, obtaining simultaneous spectra of up to 130 galaxies or stars. Astronomers study fields of distant galaxies with DEIMOS, efficiently probing the most distant corners of the universe with high sensitivity. Support for DEIMOS was generously provided by the National Science Foundation. 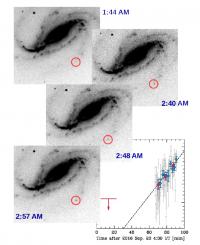