AMES, Iowa - Backed by experimental data from a laboratory machine that simulates the huge forces involved in glacier flow, glaciologists have written an equation that accounts for the motion of ice that rests on the soft, deformable ground underneath unusually fast-moving parts of ice sheets.

That equation - or "slip law" - is a tool that scientists can include in computer models of glacier movement over the deformable beds of mud, sand, pebbles, rocks and boulders under glaciers such as the West Antarctic Ice Sheet, said Neal Iverson, the project leader and a professor of geological and atmospheric sciences at Iowa State University. Models using the new slip law could better predict how quickly glaciers are sliding, how much ice they're sending to oceans and how that would affect sea-level rise.

A paper published online today by the journal Science describes the new slip law and the experiments and data that motivate it. Authors are Lucas Zoet, a postdoctoral research associate at Iowa State from 2012 to 2015 and now an assistant professor of geoscience at the University of Wisconsin-Madison, and Iverson.

Why do glaciologists need a slip law?

"The potential collapse of the West Antarctic Ice Sheet is the single largest source of uncertainty in estimations of future sea-level rise, and this uncertainty results, in part, from imperfectly modeled ice-sheet processes," Zoet and Iverson wrote in their paper.

Iverson started experiments with the 9-foot-tall ring-shear device inside his laboratory's walk-in freezer in 2009. At the center of the device is a ring of ice about three feet across and eight inches thick. Below the ring is a hydraulic press that can put as much as 100 tons of force on the ice and simulate the weight of a glacier 800 feet thick. Above the ring are motors that can rotate the ice at speeds of 1 to 10,000 feet per year.

The ice is surrounded by a tub of temperature-controlled, circulating fluid that keeps the ice ring right at its melting temperature so it slides on a thin film of water - just like all fast-flowing glaciers.

A $530,000 grant from the National Science Foundation supported development of the device. Iverson worked with three engineers from the U.S. Department of Energy's Ames Laboratory - Terry Herrman, Dan Jones and Jerry Musselman - to turn his ideas into a working machine.

And it has worked for about a decade, providing data on how glaciers move over rigid rock and deformable sediment.

A drag on the ice

For the experiments that led to the new slip law, Zoet drove from Ames to Madison to fill six, 5-gallon buckets with real, glacially deposited sediment called till that had the right mix of mud, sand and larger rock particles.

He'd scoop that into the ring-shear device to make the till bed. He'd then construct an ice ring above it by freezing layers of water seeded with ice crystals. He'd apply force on the ice, heat it until it was melting and turn on the machine.

"We were after the mathematical relationship between the drag holding the ice back at the bottom of the glacier and how fast the glacier would slide," Iverson said. "That included studying the effect of the difference between ice pressure on the bed and water pressure in the pores of the till - a variable called the effective pressure that controls friction."

The data indicated the relationship between "drag, slip velocity and effective pressure that is needed to model glacier flow," Iverson said.

"Glacier ice is a highly viscous fluid that slips over a substrate - in this case a deformable till bed - and friction at the bed provides the drag that holds the ice back," Iverson said. "In the absence of friction, the weight of the ice would cause it to accelerate catastrophically like some landslides."

But it's nearly impossible to get drag data in the field. Zoet said the act of drilling through the ice would change the interface between the glacier and bed, making measurements and data less accurate.

So Iverson built his laboratory device to collect that data, and Zoet has built a slightly smaller version for his Wisconsin laboratory. Zoet's machine features a transparent sample chamber so researchers can see more of what's happening during an experiment.

The resulting experimentally based slip law for glaciers moving over soft beds should make a difference in predictions of glacier movement and sea-level rise: 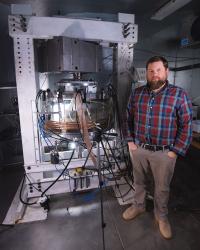