Bird species that have the capacity to express novel foraging behaviours are less vulnerable to extinction than species that do not, according to a collaborative study involving McGill University and CREAF Barcelona and published today in Nature Ecology & Evolution.

The researchers found that birds that were able to incorporate new foods into their diet or develop new techniques to obtain food were better able to withstand the environmental changes affecting their habitat, which represent their main threat of extinction.

Throughout the years, scientists have noticed numerous examples of these behaviours. Green herons have been repeatedly observed using bread or insects as bait to catch fish. Opportunistic carrion crows have been seen using cars as nut- or seashell-crackers. Great cormorants in New Zealand have been observed coordinating their fishing periods with the movements of commercial ferries in order to take advantage of the strong currents generated by the propellers to catch confused fish.

The ability to innovate, a measure of 'behavioural plasticity', has long been thought to render species less vulnerable to the risk of extinction, but it has been difficult to test this thoroughly on a global level.

Louis Lefebvre, the senior author of the new study, who teaches in McGill's Biology Department, he has spent the last 20 years combing through the literature, searching for evidence of foraging innovations in the wild. Thanks to the tireless dedication of bird watchers from around the world who have reported these novel behaviours, he has been able to compile a database of over 3,800 bird foraging innovations.

"The large database we now have has allowed us to test, on almost all bird species of the world, the idea that the more you can change your feeding behaviour, the better you might be able to cope with destruction of your normal habitat," said Lefebvre. "We feel our results are solid, as we have taken into account as many co-variables and possible biases that we could think of."

The researchers gathered information about the feeding innovations described in articles published in 204 ornithological journals between 1960 and 2018.They then compared the number of observed innovations of each species with the level of their risk of extinction according to the Red List of the International Union for Conservation of Nature (IUCN). Their modelling showed that extinction risk was reduced in species that displayed innovative behaviours, and as the number of these behaviours increased, extinction risk was reduced further.

"We long suspected that this relationship between innovation and survival must exist, but now we have been able to verify it quantitatively," says the study's first author, Simon Ducatez, a post-doctoral researcher at McGill University and at CREAF in Barcelona. "We have also been able to verify that the greater the number of innovations described for a species, the greater the probability that its populations are stable or increasing. The result is clear: the greater the innovative capacity, the lower the risk of extinction of the species."

Ability to find new food sources no guarantee of survival

The authors caution that behavioural plasticity only reduces birds' risk of extinction from habitat alteration, and that it does not affect sensitivity to invasive species or overexploitation. The study reveals that the ability to invent new behaviours represents a clear evolutionary advantage for birds coping with the destruction of their habitats, although it is not always a guarantee of survival.

Indeed, the type of problem-solving skills that allow birds to face drastic changes in habitat does not seem to work against other types of threats such as over hunting. "It must be taken into account that the species with the greatest capacity for innovation have longer generation times, which makes them more vulnerable to hunting," explains Daniel Sol, researcher at CREAF and the CSIC in Barcelona. "This implies that, unlike what is usually assumed, the ability to innovate protects animals from some but not all of the rapid changes in the environment."

This research was supported by funds from the Spanish government and by the Natural Sciences and Engineering Research Council of Canada (NSERC). 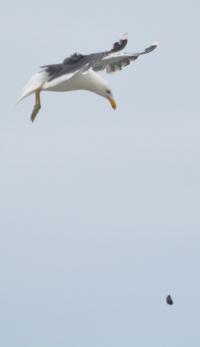