The western Antarctic Peninsula is experiencing rapid environmental change, with warming air and ocean temperatures and decreasing sea ice. How these changes will affect Antarctic krill is a crucial question, because this abundant crustacean is an important food source for a wide range of animals, from penguins to whales.

One species, the crabeater seal, feeds almost exclusively on Antarctic krill. Researchers have now used data from tracking studies of crabeater seals to build a habitat model that can be used to infer the distribution of krill and project how it is likely to change in the future. The study, published April 27 in Nature Climate Change, was led by scientists at UC Santa Cruz.

"We're using the feeding behavior of this one predator as an indicator of the habitat for their prey and how that could change," said first author Luis Huckstadt, a researcher in the Institute of Marine Sciences (IMS) at UC Santa Cruz.

Coauthor Daniel Costa, professor of ecology and evolutionary biology and director of the IMS, has been studying crabeater seals in Antarctica for many years, using electronic tags to track their movements at sea and, at the same time, collect environmental data. Crabeater seals swim at the surface when traveling and only dive when they are feeding on krill, so the tracking data clearly indicate where krill are located and, when combined with remote sensing data, what the oceanographic conditions are at those sites.

Huckstadt and his coauthors used these data, together with oceanographic circulation models, to build a high-resolution, 3-dimensional model of current crabeater seal foraging habitat and, by inference, krill habitat along the western Antarctic Peninsula. The researchers then ran the model under conditions expected in the future as the climate continues to change.

Their projections indicate that areas of krill habitat along the northern part of the peninsula will shrink and move farther offshore, while becoming more extended in the southern part, south of Alexander Island and in the Bellinghausen Sea. The reduced foraging habitat in the north occurs primarily during the summer months, when many other krill predators join crabeater seals in the hunt for food. To adapt to the changes in krill distribution, predators will have to shift further south themselves, switch to other prey, or make longer foraging trips.

"The shift in krill habitat away from coastal waters in the north has big implications for species like penguins and fur seals, which can't make long foraging trips because they have to come back to land to feed their offspring," Huckstadt said.

Crabeater seals are not restricted to a colony and have more flexibility to follow their prey over large distances. They are also one of the few marine mammals that stays in Antarctica through the winter. Species such as humpback and minke whales that migrate to the region in the summer to feed on krill will have to travel farther to reach krill habitat, Huckstadt said.

"It will be challenging for a lot of species," he said. "Things are changing so fast in Antarctica, the changes we're seeing in our model might be coming sooner than we expected."

Another unknown is how the Antarctic krill fishery will affect the abundance of krill as the population responds to these changes in its habitat. Costa noted that the Antarctic Peninsula is the primary region where krill are fished. Climate change combined with increasing pressure from the krill fishery may have profound effects on this ecosystem.

"We don't really have a good grasp on how fishing pressure will change in the future, and that's one reason so many marine protected areas have been proposed for the western Antarctic Peninsula," Huckstadt said. "The peninsula is critical habitat for krill, which is the most abundant and important prey species in this region. Everything depends on krill, so any changes will cascade through the ecosystem."

In addition to Huckstadt and Costa, the coauthors of the paper include Andrea Piñones at Universidad Austral de Chile, Daniel Palacios at Oregon State University, Birgitte McDonald at Moss Landing Marine Labs, Michael Dinniman and Eileen Hofmann at Old Dominion University, Jennifer Burns at the University of Alaska, and Daniel Crocker at Sonoma State University. This work was funded by the U.S. National Science Foundation, Office of Naval Research, and CONICYT-Fulbright (Chile). 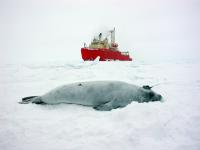