Tropical Storm Franklin was generating heavy rain when NASA's GPM satellite observed the rainfall from space. That rainfall is expected to soak Mexico as Franklin continues to move over the Yucatan Peninsula on August 8, 2017.

Before Tropical Storm Franklin made landfall in Mexico's Yucatan Peninsula early on August 8, NASA's Aqua satellite looked at cloud extent and size of the storm, and the Global Precipitation Measurement mission or GPM core satellite analyzed it's rainfall rates.

At the Naval Research Laboratory in Washington, D.C. a composite image of satellite data was created combining GPM rainfall data with infrared cloud imagery from NOAA's GOES-13 satellite to give a full picture of Tropical Storm Franklin's clouds and rainfall rates. The GPM imagery showed rainfall rates greater than 1.6 inches per hour occurring around the center and south of the center of circulation. That heavy rainfall is expected to affect the Yucatan Peninsula on August 8 as the storm tracks through it.

The GPM satellite is co-managed by both NASA and the Japan Aerospace Exploration Agency or JAXA.

NASA's Aqua satellite provided a look at the extent of the storm's clouds on Aug. 7 at 3:10 p.m. EDT (19:10 UTC). The visible-light image, captured by the MODIS instrument aboard Aqua, showed Franklin's western quadrant over the Yucatan Peninsula as Franklin's center remained over the northwestern Caribbean Sea. The MODIS image also revealed the storm had developed an eye.

On August 8, the government of Belize has discontinued the Tropical Storm warning for Belize as Franklin moved north and made landfall in Mexico's Yucatan Peninsula.

The National Hurricane Center (NHC) forecast reflects the heavy rainfall that GPM found in Franklin on August 7. On August 8 NHC said "rainfall amounts of 3 to 6 inches, with isolated amounts of around 12 inches, are possible across the Yucatan Peninsula of Mexico and Belize through Wednesday, with the highest amounts over the Mexican state of Quintana Roo. In addition, Franklin is expected to bring 4 to 8 inches of rainfall with isolated amounts up to 15 inches through Thursday to northern Veracruz, Puebla,

Tlaxcala, Hidalgo, and eastern San Louis Potosi in eastern Mexico. These rains will be capable of producing life-threatening flash floods and mudslides."

At 8 a.m. EDT (1200 UTC) on August 8 the center of Tropical Storm Franklin was located near 19.5 degrees north latitude and 89.1 degrees west longitude. That's about 85 miles (140 km) northwest of Chetumal, Mexico and 95 miles (155 km) east-southeast of Campeche, Mexico. Franklin was moving toward the west-northwest near 14 mph (22 kph) and the National Hurricane Center expects a west-northwestward to westward motion over the next couple of days. On the forecast track, the center of Franklin will continue to move across the Yucatan peninsula today, and emerge over the Bay of Campeche this evening or tonight. Franklin will then move westward across the Bay of Campeche on Wednesday, August 9.

Maximum sustained winds have decreased to near 45 mph (75 kph) with higher gusts. Additional weakening is expected while Franklin moves across the Yucatan peninsula today. NHC said re-strengthening is forecast to begin tonight and Wednesday while Franklin moves over the Bay of Campeche. 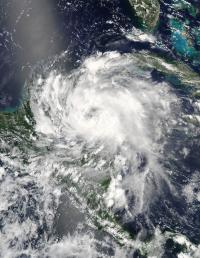