Trees are dying twice as fast as they did three decades ago in older forests of the western United States and scientists suspect warming temperatures are a contributing factor.

In the Pacific Northwest and southern British Columbia, the rate of tree death in older coniferous forests doubled in 17 years. That rate of increase is about 1.5 times faster than California forests, where mortality rates took 25 years to double. California, however, still had the highest tree mortality rates at the end of the study. Mortality has been lowest for forests in the interior states and the rate of change was slower, taking 29 years to double.

"This suggests that one, or several, northwestern tree species are sensitive to whatever is going on," says Jerry Franklin, a professor of forest resources at the University of Washington and one of 11 co-authors of a report in the Jan. 23 issue of Science.

Temperatures have risen more than 1 degree Fahrenheit in 30 years and that reduces snow pack, prolongs drought and helps insects and diseases to flourish, all of which could be affecting trees, according to the report in Science.

Even small changes in mortality rates can add up because the effects compound. Just doubling the rate from 1 percent a year to 2 percent a year doesn't sound like much. For 100 trees, a 1 percent mortality per year means the stand would have 60 trees after 50 years. But a mortality rate of 2 percent per year would result in 36 trees after 50 years. In addition, a doubling of the rate can gradually change the very face of the forest, with the trees overall being younger and, presumably, smaller.

"An alarming implication of increased mortality rates is that the fundamental structure of these forests could be undergoing change," Franklin says. "The forests may stabilize at lower overall levels of biomass resulting in less carbon stored in the forests – although the old forests will still sequester large amounts of carbon."

The forests in the study were all older than 200 years and many were established more than 500 years ago. Such forests are considered to be much more in equilibrium than young forests where competition is a key reason trees die. Consequently, in young stands it is nearly impossible to distinguish changes in mortality related to external factors such as climate variability, Franklin says.

Older forests have trees of all ages and researchers found that mortality rates increased for all age groups, ruling out the idea that the increase resulted from the very oldest trees dying. Also ruled out were the effects of forest fragmentation, air pollution and suppressing wildfires, which can lead to overcrowded stands susceptible to insect attacks or catastrophic wildfires.

This is the first large-scale analysis of mortality rates in temperate forests. Much of the world's population – in North America, Europe, most of China and large portions of Russia – live near temperate forests so what happens in these forests has global importance, Franklin says.

Some scientists say that tree species unable to tolerate warmer conditions might just re-establish themselves in cooler areas. Given the speed at which warming appears to be occurring, Franklin questions whether tree species will be able to "migrate" at a sufficient rate, particularly in light of how temperate forest landscapes have been fragmented.

"My guess is that forest loss has the potential to greatly exceed forest establishment," Franklin says.

Discoveries of the type reported in Science are only possible as a result of long-term studies that depend on monitoring of forest plots over decades, Franklin says.

"Unfortunately, even though long-term data sets are the basic currency of ecological science, it is difficult to obtain the funding necessary to maintain long-term measurement programs," he says.

Funding for northwestern forest plots used for research has come from many sources including the National Science Foundation, U.S. Forest Service's Pacific Northwest Research Station, National Park Service, UW and Oregon State University. Undergraduate students from institutions including Peninsula College in Port Angeles, Wash., Lewis and Clark College in Portland, UW and OSU also have been essential to the effort by volunteering to re-measure plots. 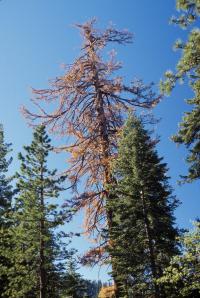