Washington, DC-- The cause of Earth's deepest earthquakes has been a mystery to science for more than a century, but a team of Carnegie scientists may have cracked the case.

Most earthquakes occur close to the Earth's surface, down to about 70 kilometers. They happen when stress builds up at a fracture between two blocks of rock--known as a fault--causing them to suddenly slide past each other.

However, deeper into the Earth, the intense pressures create too much friction to allow this kind of sliding to occur and the high temperatures enhance the ability of rocks to deform to accommodate changing stresses. Though theoretically unexpected, scientists have been able to identify earthquakes that originate more than 300 kilometers below the surface since the 1920s.

"The big problem that seismologists have faced is how it's possible that we have these deep-focus earthquakes at all," said Wagner. "Once you get a few tens of kilometers down, it becomes incredibly difficult to explain how we are getting slip on a fault when the friction is so incredibly high."

Ongoing work over the past several decades has shown us that water plays a role in intermediate-depth earthquakes--those that occur between 70 and 300 kilometers below Earth's surface. In these instances, water is released from minerals, which weakens the rock around the fault and allows the blocks of rock to slip. However, scientists didn't think this phenomenon could explain deep-focus earthquakes, largely because it was believed that water and other fluid-creating compounds couldn't make it far enough down into the Earth's interior to provide a similar effect.

This thinking changed for the first time when Shirey and Wagner compared the depths of rare deep-Earth diamonds to the mysterious deep-focus earthquakes.

"Diamonds form in fluids" explained Shirey, "if diamonds are there, fluids are there."

The diamonds themselves indicated the presence of fluids, however, they also brought samples of the deep-Earth to the surface for the scientists to study. When diamonds form in the Earth's interior, they sometimes capture pieces of mineral from the surrounding rock. These minerals are called inclusions and they may make your jewelry less expensive, but they are invaluable to Earth scientists. They are one of the only ways scientists can study direct samples of our planet's deep interior.

The diamond's inclusions had the distinct chemical signature of similar materials found in oceanic crust. This means that the water and other materials weren't somehow created deep in the Earth's interior. Instead, they were carried down as part of a sinking oceanic plate.

Said Wagner: "The seismology community had moved away from the idea that there could be water that deep. But diamond petrologists like Steve were showing us samples and saying 'No, no, no. There's definitely water down here' So then we all had to get together to figure out how it got down there."

To test the idea, Wagner and van Keken built advanced computational models to simulate the temperatures of sinking slabs at much greater depths than had been attempted before. In addition to the modeling, Walter examined the stabilities of the water-bearing minerals to show that under the intense heat and pressures of the Earth's deep interior, they would, indeed, be capable of holding on to water in certain conditions. The team showed that even though warmer plates didn't hold water, the minerals in the cooler oceanic plates could theoretically carry water to the depths we associate with deep-focus earthquakes.

To solidify the study the team compared the simulations to real-life seismological data. They were able to show that the slabs that could theoretically carry water to these depths were also the ones experiencing the previously unexplained deep earthquakes.

This study is unusual in applying four different disciplines--geochemistry, seismology, geodynamics, and petrology--to the same question, all of which point to the same conclusion: water and other fluids are a key component of deep-focus earthquakes.

"The nature of deep earthquakes is one of the big questions in geoscience," said Shirey. "We needed all four of these different disciplines to come together to make this argument. It turned out we had them all in-house at Carnegie."

The authors thank the Carnegie Institution for Science and the University of Alberta for continuing support. Diamond research is supported by the Deep Carbon Observatory and the U.S. National Science Foundation.

What causes the deep Earth's most mysterious earthquakes? 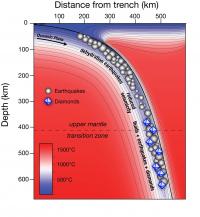