Sydney: A laboratory study has found that bicycle helmets certified to Australia's national standard significantly reduce the causes of head, skull and brain injury - linear and angular head accelerations, and the impact force of a crash.

Crashing without a helmet exposes the head to accelerations and forces – or loads - up to 9.5 times greater than with a helmet and so greatly increases the risk of head, skull and brain injury, according to a detailed biomechanical study published in the journal Traffic Injury Prevention.

"Our findings confirm that bicycle helmets certified to AS/NZS 2063 do indeed work as intended and are effective in reducing linear and angular head accelerations, as well as impact force," says the lead author of the study, Dr Andrew McIntosh.

"These results directly counter unsupported claims to the contrary by some anti-helmet cycling campaigners." Dr McIntosh is an adjunct Associate Professor at UNSW's Transport and Road Safety Research Group and the Monash Injury Research Institute at Monash University.

The study used crash-test dummies and an oblique-impact test rig to measure the loads placed on the human head in a variety of impacts that simulated the likely real-world results of falling from a bicycle at various speeds and heights.

The researchers dropped a dummy head and neck from selected heights onto a moving impact surface to replicate real-world oblique impacts, and measured angular and linear acceleration, impact force and other parameters. The dummies were dropped up to 1.5 m and at a horizontal speed of up to 25 km/h.

"When you look at injury risk, an unprotected head is likely to suffer concussion even dropping only half a metre while you are stationary," says Dr McIntosh. "As the height of the drop and the horizontal speed increase, so does the risk of skull and brain injury."

"We found that a helmeted head, however, is protected against serious injury until the most severe impacts in our study: even with a drop of 1.5 m and a speed of 25 km/h the helmet has an important protective effect."

"The study also reinforced the need to adjust the helmet restraint system correctly to gain the most benefit. It also points to areas where helmets can be improved further by introducing oblique impact tests into consumer rating programs and/or standards."

"An important component of the anti-bicycle helmet rhetoric is that helmets increase the risk of brain injury by increasing the angular acceleration of the head in an impact relative to no helmet. Our tests found that unsupported claim is wrong. In fact, there is a substantial effect of helmets in reducing head loads, including angular acceleration."

Helmet crash tests: Don't hit the road without one 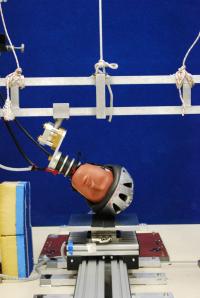