A University of Exeter biologist has discovered a 'lost' species of bat breeding on the Isles of Scilly (UK). A pregnant female brown long-eared bat is the first of its species to be found on the islands for at least 40 years. It was discovered by Dr Fiona Mathews, Senior Lecturer at the University of Exeter, a postgraduate student and a team from the Wiltshire Bat Group.

The Scilly Isles Bat Group called in Dr Mathews and her team to help them find out more about bats on the islands. The researchers set up a radiotracking study, with funding from the Isles of Scilly Area of Outstanding Natural Beauty, to monitor the islands' bat activity.

The team solved the mystery of the annual disappearance of the large common pipistrelle colony on St Mary's by finding that the bats had moved to a new site. They also discovered that there were brown-long eared bats roosting in a pine tree.

Dr Fiona Mathews of the University of Exeter said: "We were surprised and delighted to find this brown long-eared bat and particularly excited that it is a pregnant female, as it suggests that there must be a breeding colony."

Brown long-eareds were last seen on the Isles of Scilly in the 1960s. Known as 'the whispering bat', these animals rely less on echolocation than other British bats and use their remarkably large ears to detect the sounds of caterpillars and their other prey on leaves. Because they only come out to fly when it is too dark to see them, and their calls are too quiet to be picked up on 'bat detectors', they are virtually impossible to detect using standard survey methods. The bats are very reliant on woodland, which is in short supply on the islands.

Dr Mathews continued: "We found this individual roosting in an old split Monterey pine tree planted by the shore as a wind-break, and feeding along avenues of elm trees. Now we know the bats are there, local conservation organisations can start to improve the habitat for them. This includes planting the tree species that attract night-flying insects, restricting lighting in key areas as it discourages the bats from coming out to feed, and ensuring that new trees are planted to replace the dying ones along the coastline.

"In addition, much can be done to provide suitable places for them to have their babies. Bats can live for over 20 years but breed very slowly. Because they do not build nests, the mothers must find locations which will keep their babies warm during the night whilst the adults leave the roost to feed. They will happily use lofts and bat boxes, as well as tree holes. The last known colony on the Isles of Scilly disappeared when their roosting site in a building was lost and now we have a chance to reverse their fortunes."

Mike Gurr, Chair of the Scilly Isles Bat Group added: "Since the formation of the IOS Bat Group in 2006, we have had sound evidence only for common pipistrelles being permanent residents and breeding in Scilly. This joint research project has confirmed the long-suspected presence of soprano pipistrelles as well but, most exciting of all, we now know for sure that we have brown long-eared bats living and breeding here. The work demonstrates what several people had long felt to be the case but could not prove. Studying these lovely creatures will be one of the IOS Bat Group's priorities for the next few years". 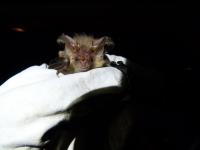