There’s safety (and security) in numbers … especially when those numbers are random. That’s the lesson learned from a DHS-sponsored research project out of the University of Southern California (USC). The research is already helping to beef up security at LAX airport in Los Angeles, and it could soon be used across the country to predict and minimize risk.

Here’s how it works: Computer software records the locations of routine, random vehicle checkpoints and canine searches at the airport. Police then provide data on possible terrorist targets and their relative importance. These data may change from one day to the next, or if there have been any security breaches or suspicious activity.

The computer runs, and—voilà—police get a model of where to go, and when. The software comes up with random decisions that are based on calculated probabilities of a terrorist attack at those locations, using mathematical algorithms.

The result: Security with airtight unpredictability. With the software, it’s extremely difficult to predict police operations.

“What the airport was doing before was not truly statistically random; it was simply mixing things up,” said computer science professor Milind Tambe. “What they have now is systematized, true randomization.”

Tambe is with the Center for Risk and Economic Analysis of Terrorism Events (CREATE), a DHS Center of Excellence based at USC. CREATE works with government agencies and other researchers to evaluate the risks, the costs, and the consequences of terrorism. The center helps policymakers set priorities and find the best, most efficient ways to counter threats and prevent attacks.

It was Tambe who had an “ah-ha moment” in 2004 that led to the LAX project. He and his team use math and computers to study “multi-agent systems”—in other words, systems in which different software applications, robots, and people interact.

By nature, Tambe contends, humans cannot oversee purely random systems for an extended period. Invariably, they’ll make decisions based on prior decisions. He recognized the parallels between this field and counterterrorism.

Praveen Paruchuri was a CREATE student at the time, and he, too, saw the connection. Then, in 2007, Paruchuri’s Ph.D. dissertation on the subject caught the eye of CREATE Associate Director Erroll Southers. Southers serves as Chief of Intelligence and Counterterrorism with the Los Angeles World Airports Police Department, which supports LAX.

Soon thereafter, Tambe and Paruchuri tested the software, and the project was born as a six-month trial period. And it was given a snappy name, of course: Assistant for Randomized Monitoring over Routes, a.k.a. ARMOR.

ARMOR has recently completed its six-month trial, and airport officials have given the university the “thumbs up” to transfer the software over to LAX on a more permanent basis.

Meanwhile, other airports, agencies, and even businesses are starting to notice, Tambe said. It’s a project that’s attracting attention from coast to coast.

But, wait: What if terrorists get hold of ARMOR and use the same information" Couldn’t they solve the predictability puzzle" Not really, Tambe said. “Even if they got the software and all the inputs, it’d be like rolling 50 different dice and expecting to correctly roll one combination of all 50 pairs.” 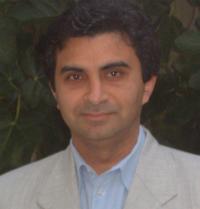