Harnessing the power of ocean tides has long been imagined, but countries are only now putting it into practice. A demonstration project planned for Puget Sound will be the first tidal energy project on the west coast of the United States, and the first array of large-scale turbines to feed power from ocean tides into an electrical grid.

University of Washington researchers are devising ways to site the tidal turbines and measure their environmental effects. Brian Polagye, UW research assistant professor of mechanical engineering, will present recent findings this week in an invited talk at the American Geophysical Union's annual meeting in San Francisco.

Polagye and colleagues are involved in environmental monitoring before and during a planned deployment of two 30-foot-wide turbines in Admiralty Inlet, the main entrance to Washington state's Puget Sound.

"There really isn't that much information, anywhere, about the environmental effects of tidal turbines," Polagye said.

"The results of this pilot project will help decide if this is an industry that has potential for going forward at the commercial scale, or if it stops at the pilot stage," Polagye said.

The Snohomish County Public Utility District, just north of Seattle, received a $10 million grant from the Energy Department for the tidal project now in the final phase of obtaining permits. The turbines would generate an average of 100 kilowatts of electricity, enough to power 50-100 Washington homes during the pilot phase.

"We want to monitor the effects of this particular project, but also understand the processes so we can apply the findings to other potential tidal energy sites," Polagye said.

To do this, the UW team must assess a new technology that operates in a little-explored environment.

"There's surprisingly little known about the oceanography of these very fast waters," said collaborator Jim Thomson, a UW assistant professor of civil and environmental engineering and an oceanographer in the UW's Applied Physics Laboratory. "These kinds of tidal channels where water is going very fast only happen in a few areas, and have not been well studied. The currents are so fast that it's hard to operate vehicles and maintain equipment. And it's too deep for conventional scuba diving."

The pilot site lies roughly 200 feet below the surface of Admiralty Inlet, where the UW team has measured currents of up to 8 knots, or 9 miles per hour.

One area of concern is how underwater noise generated by the turbines could affect marine mammals that use auditory cues to navigate and communicate with each other. Strong currents complicated the task of measuring how sound travels in the channel.

"When currents were more than about 2 knots the instruments are hearing considerable self-noise," Polagye said. "It's similar to when you're bicycling downhill and the air rushes past your ears."

Chris Bassett, a UW doctoral student in mechanical engineering, is testing approaches that would allow underwater microphones to work in fast-moving water.

UW researchers used sound from a Washington state ferry to learn how turbine noise would spread from the project site. The data suggest that Admiralty Inlet tends to lessen sound. This reduces the effect on animals' hearing, which is good, but it also means less noise for marine mammals to detect turbines and avoid them.

The UW team has been measuring currents continuously at the proposed site for almost two years, using a monitoring tripod the size of a small refrigerator. With added ballast for stability, the device weighs 850 pounds in water. Even so, it can barely stay put on the ocean floor.

The monitoring tripod holds instruments to track water quality, ambient noise, currents, temperature and salinity, and to record marine mammal calls and electronic tags on passing fish. This observational data will help determine precisely where to put the tidal turbines, and establish potential environmental effects once they are in the water.

So far, researchers say, the data support the notion that the Admiralty Inlet is well suited for a tidal energy installation from an engineering perspective. Once the turbines are in the water, likely in 2013, researchers will monitor environmental effects.

The Admiralty Inlet characterization is being conducted by the Northwest National Marine Renewable Energy Center, in which the UW leads research on tidal energy. Polagye and Thomson lead research on characterizing the physical attributes, such as currents and sound propagation. UW fisheries scientists recently received funding to test instruments for monitoring fish at the site, UW mechanical engineers are using computer models to see how pressure changes caused by tidal turbines could affect sediments and fish, and UW oceanographers are calculating when turbines would begin to affect the Sound's tides and currents.

The Washington state deployment is among three U.S. tidal energy pilot projects now in the works (the others are in Maine and Alaska). An array of smaller turbines was operated during a pilot project in New York City's East River.

The work is funded by the Snohomish County Public Utility District and the U.S. Department of Energy. Also collaborating in the research presented at the meeting is Jeff Epler, a graduate student in mechanical engineering. 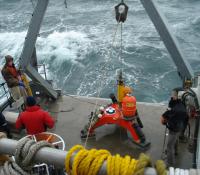 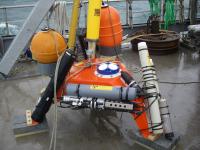