Woe to the clueless predator trying to make a meal of the African crested rat, a rodent that applies poisonous plant toxin to sponge-like hairs on its flanks, a discovery recently made by Jonathan Kingdon and colleagues from the National Museums of Kenya, the Wildlife Conservation Society, and University of Oxford.

In the only known instance of a mammal acquiring a lethal toxin from a plant for defense, the researchers have discovered where the African crested rat (or maned rat) gets its poison: the Acokanthera tree, the same source used by East African hunters for poison arrows.

The study appears online in the Proceedings of The Royal Society B. The authors include: Jonathan Kingdon, Chris Holland, Tom Gheysens, Maxime Boulet-Audet, and Fritz Vollrath of the University of Oxford; Bernard Agwanda of the National Museums of Kenya; and Margaret Kinnaird and Tim O'Brien of the Wildlife Conservation Society.

"The African crested rat is a fascinating example of how a species can evolve a unique set of defenses in response to pressure from predators," said Dr. Tim O'Brien, Senior Scientist of the Wildlife Conservation Society and a co-author on the study. "The animal and its acquired toxicity is unique among placental mammals."

Scientists have long suspected that the African crested rat is poisonous, primarily due to the animal's specialized behavior, such as exposing a black-and-white coloration on its flanks when threatened by predators, and accounts of dogs becoming ill or dying after encounters with rats. The new discovery concerns the nature of the chemical defense. Instead of producing poison itself—as is the case with poisonous mammals such as the duck-billed platypus and solenodon—the African crested rat finds its toxin (called ouabain) in tree bark.

The researchers confirmed the hypothesis by presenting a wild-caught rat with branches and roots of the Acokanthera tree. The rodent proceeded to gnaw and masticate the bark (avoiding the leaves and fruit) and apply the "slaver" on its flanks. Further, the research team employed electron microscopes to examine the unique structure of the flank hairs. In doing so, they found that the perforated cylindrical structure of the hairs facilitates the rapid absorption of the poisonous saliva. Interestingly, ouabain has also been used by doctors for centuries as a clinical treatment against congestive heart failure.

Besides its warning coloration and poisonous hairs, the African crested rat possesses a thick reinforced skull, thick vertebrae, and unusually tough skin, all protection for the small rodent that rarely grows to more than 2 pounds in weight.

Several mysteries about the enigmatic rodent remain, including how the animal uses poison without succumbing to it. 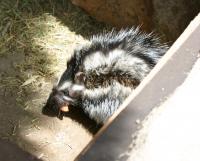