Researchers at The University of Nottingham have developed a break-through technique that uses sound rather than light to see inside live cells, with potential application in stem-cell transplants and cancer diagnosis.

The new nanoscale ultrasound technique uses shorter-than-optical wavelengths of sound and could even rival the optical super-resolution techniques which won the 2014 Nobel Prize for Chemistry.

This new kind of sub-optical phonon (sound) imaging provides invaluable information about the structure, mechanical properties and behaviour of individual living cells at a scale not achieved before.

Researchers from the Optics and Photonics group in the Faculty of Engineering, University of Nottingham, are behind the discovery, which is published in the paper 'High resolution 3D imaging of living cells with sub-optical wavelength phonons' in the journal, Scientific Reports.

"People are most familiar with ultrasound as a way of looking inside the body -- in the simplest terms we've engineered it to the point where it can look inside an individual cell. Nottingham is currently the only place in the world with this capability," said Professor Matt Clark, who contributed to the study.

In conventional optical microscopy, which uses light (photons), the size of the smallest object you can see (or the resolution) is limited by the wavelength.

For biological specimens, the wavelength cannot go smaller than that of blue light because the energy carried on photons of light in the ultraviolet (and shorter wavelengths) is so high it can destroy the bonds that hold biological molecules together damaging the cells.

Optical super-resolution imaging also has distinct limitations in biological studies. This is because the fluorescent dyes it uses are often toxic and it requires huge amounts of light and time to observe and reconstruct an image which is damaging to cells.

Unlike light, sound does not have a high-energy payload. This has enabled the Nottingham researchers to use smaller wavelengths and see smaller things and get to higher resolutions without damaging the cell biology.

"A great thing is that, like ultrasound on the body, ultrasound in the cells causes no damage and requires no toxic chemicals to work. Because of this we can see inside cells that one day might be put back into the body, for instance as stem-cell transplants," adds Professor Clark.

Our academics can now be interviewed for broadcast via our Media Hub, which offers a Globelynx fixed camera and ISDN line facilities at University Park campus. For further information please contact a member of the Communications team on +44 (0)115 951 5798, email mediahub@nottingham.ac.uk or see the Globelynx website for how to register for this service.

About The University of Nottingham: The University of Nottingham has 43,000 students and is 'the nearest Britain has to a truly global university, with a "distinct" approach to internationalisation, which rests on those full-scale campuses in China and Malaysia, as well as a large presence in its home city.' (Times Good University Guide 2016). It is also one of the most popular universities in the UK among graduate employers and winner of both 'University of the Year for Graduate Employment', according to the 2017 The Times and The Sunday Times Good University Guide and 'Outstanding Support for Early Career Researchers' at the Times Higher Education Awards 2015. It is ranked in the world's top 75 by the QS World University Rankings 2015/16. More than 97 per cent of research at The University of Nottingham is recognised internationally and it is 8th in the UK by research power according to the Research Excellence Framework 2014. It has been voted the world's greenest campus for four years running, according to Greenmetrics Ranking of World Universities.

New ultrasound technique is first to image inside live cells 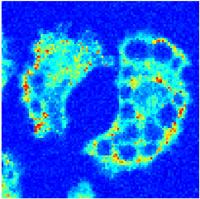