Given the choice between ice cream and vegetables, for many people it'll be the ice cream. But sometimes it depends on the situation. If you'd eaten ice cream every day for a week, you might prefer the salad. Human preferences for different foods often depend on what's common fare and what's rare.

For non-human animals, like moose, the situation is equally complicated. An adult moose must eat approximately 40 pounds of vegetation per day just to keep itself going. Yet despite their need to consume large volumes of food every day, moose do not eat everything they come across. Instead, moose are considerably more selective than is obvious when deciding which plant species to eat.

Sarah Hoy, assistant research professor, and John Vucetich, distinguished professor, in the School of Forest Resources and Environmental Science at Michigan Technological University, in collaboration with scientists from the United States Geological Survey (USGS) and the University of Wyoming, have developed a method to analyze why moose choose to eat what they do, how their choices change in the presence of predation and how moose diets actually affect the stability of entire ecosystems.

The results appear in "Negative frequency-dependent foraging behaviour in a generalist herbivore (Alces alces) and its stabilizing influence on food web dynamics" published in the Journal of Animal Ecology.

"The research shows how what you would think is a simple decision -- what to eat -- is a complex process that depends on many environmental factors, such as how common food types are, how likely a moose is to be killed by a predator and how difficult deep snow makes it to move around and find food," Hoy said. "The moose eat upwards of 40 pounds each day. You'd think if you had such dietary requirements you'd stuff your face with anything you can find, but that doesn't appear to be the case."

"Something one might consider small, even trivial -- what a moose chooses to eat -- appears to have a stabilizing effect on the whole food web." -- Sarah Hoy, assistant research professor

The advantage to moose of taking the time to seek out and eat plant species that are relatively rare is a well-balanced diet, which requires nutrients that might be found only in those rarer plants. Many plants also contain chemicals that are toxic to moose in large quantities, which means that moose can ingest them only in limited amounts. However, a moose whose palate is too discerning pays a price; a cost of focusing too much on the rare plants is the time spent on the search. Additionally, a moose in search of a delicacy might be a more likely target for a wolf.

"Moose have a choice: eat the rare stuff at risk of not eating enough food overall, or eat what is most common in the forest at risk of missing out on a well-balanced diet," Hoy said. "We hadn't really known how moose manage that choice until now."

By analyzing a decade's worth of moose droppings under a polarized light microscope -- a technique known as microhistology, which is further explored on Michigan Tech's Unscripted science and research blog -- to determine what exactly moose are eating on Isle Royale, the researchers concluded that moose preferred to eat what was relatively rare in their home range. If balsam fir is rare, they prefer it; if balsam fir is common, they show less preference -- even passing it up in many cases to find a less common plant. However, moose appeared to become less fussy eaters in years when the risk of being killed by wolves was high and in years when deep snow likely made it more difficult for moose to move around and find food.

By combining the evidence of years of meticulous fieldwork with a mathematical model representing the Isle Royale system, Hoy and her fellow scientists were able to draw conclusions about why it's important that moose are choosy eaters in the context of the ecosystem.

Enter Rongsong Liu, associate professor of mathematics at the University of Wyoming. Liu built a mathematical food chain model that she said, "demonstrates that the selective foraging strategies of moose can have an important stabilizing effect on community dynamics and provide a useful framework for assessing the influence of the other aspects of foraging behavior on community stability."

The model further illuminates the strength of the connections across three trophic levels of the Isle Royale landscape: vegetation, herbivore, carnivore.

"The mathematical model is a way to test how important the patterns in moose behavior we observed are for the community as a whole," Hoy said. "Moose may change their diet in response to a harsh winter or a high risk of being killed by wolves, but how important is that to the ecosystem?"

Don DeAngelis, a research ecologist for the USGS, has worked with Liu to develop and analyze models of herbivores of the boreal forest, including moose. One factor influencing what a moose prefers to eat is the aforementioned toxins in certain plants and how those toxins can effectively skew moose diets toward better overall balance.

"The data implied the moose were deliberately limiting their intake of coniferous vegetation, and also that this effect was related to the level of other environmental conditions, probably the level of predation by wolves," DeAngelis said. "My role was to work with Liu to translate the way that we think wolves, moose and forest vegetation all interact with each other into mathematical equations, and then use these equations to build a model that reflects the way that the Isle Royale ecosystem works."

Ecological theory indicates that simple food chains, such as that of Isle Royale National Park, are prone to extinction. Where there is a single predator -- wolves -- and a single herbivore -- moose, which eats two basic kinds of plants: deciduous and conifer trees -- there can be erratic population fluxes. However, Hoy, Vucetich and colleagues discovered that the foraging behavior of the moose might be one factor that favors the persistence of wolves, moose and the different tree species in the food chain.

This distinctive combination of theoretical models and field observations from the predator-prey study on Isle Royale provides ecologists with more insight about how and why populations tend to persist where basic theories of ecology otherwise suggest that they should not. 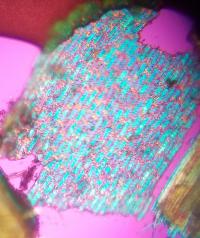