Troy, N.Y. -- Researchers at Rensselaer Polytechnic Institute are challenging current thinking on the causes and prevention of Alzheimer’s disease, offering a new hypothesis that could be the key to preventing this form of dementia. The researchers have found that a specific imbalance between two peptides may be the cause of the fatal neurological disease that affects more than five million people in the United States.

"We have found that two peptides, AB42 and AB40, must be in balance for normal function," said Chunyu Wang, lead researcher and assistant professor of biology at Rensselaer. "They are like the Yin and Yang in Taiji, an ancient Chinese philosophy. When the peptides are produced in the correct proportions, the brain is healthy; but when that delicate balance is changed, pathological changes will occur in the brain and the person’s memories become hazy, leading to eventual dementia."

Wang expects that this imbalance could be the main factor in the progression of Alzheimer’s disease. If correct, the addition of AB40 may stop the disease’s development. Wang notes that further research is needed, but his preliminary results challenge the current mode of thinking about how these peptides contribute to the progression of the disease.

The research will be published in the June edition of the Journal of Molecular Biology.

Peptides are formed by the linking of different amino acids. The two peptides that Wang investigated were both Amyloid B-peptides (AB) — specifically those composed of 40 and 42 amino acids, called AB40 and AB42. These two peptides have been previously found in deposits, called senile plaques or amyloid plaques, in brains afflicted with Alzheimer’s disease. These plaques, mainly composed of AB42 fibrils, are a hallmark of Alzheimer’s disease.

Prior research has uncovered that increased levels of AB42 become toxic to brain cells when individual molecules of AB42, or monomers, combine to form oligomer or fibril chains. This process is called aggregation. But the role of AB40, which is also found in senile plaques and generated from the same protein as AB42, has not been clearly established. Wang set out to determine what role this peptide played in the generation of AB42 aggregates.

Wang used the advanced Nuclear Magnetic Resonance (NMR) machines within Rensselaer’s Center for Biotechnology and Interdisciplinary Studies to monitor the formation of harmful AB42 fibrils in the presence of different levels of AB40. NMR is an extremely powerful research tool capable of characterizing the three-dimensional structure and dynamics of biological molecules.

"We have found that the ratio of AB40 to AB42 plays a key role in AB42 aggregation," Wang said. "The current mode of thinking in Alzheimer’s emphasizes the toxic role of AB42 but neglects the protective role of AB40. Combined with previous work on AB40 by many other groups, our data suggest that AB40 has an equally important, protective role in Alzheimer’s. Thus AB42, the bad molecule, and AB40, the good molecule, are like Yin and Yang in Taiji. The brain can only function normally when they are in balance."

Wang’s experiments show that when there is 15 times more AB40 than AB42, the formation of AB42 fibrils is almost completely stopped. "This means that the introduction of AB40 to tip the peptide balance toward AB40 could potentially halt or slow down the progression of the Alzheimer’s in the human brain," Wang said.

Wang plans to continue investigating how AB40 halts the formation of AB42 fibrils, and he already sees vast implications for this change in thinking about the progression of the disease.

"This has the potential to become a simple therapy to prevent the formation of toxic AB42 species," he said. "I plan to continue my research on the role of AB40 and hope that we can test this theory on human neurons, animal models, and someday in clinical trials. One critical advantage of using AB40 for the prevention or therapy for Alzheimer’s is that AB40 is already known to be largely free of side effects at near physiological concentration." 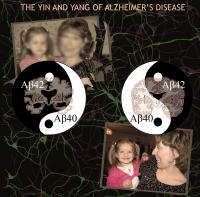 The Yin and Yang of Alzheimer's