Sept. 1, 2020 -- Studies show those flashing real-time speed limit displays you see in neighborhoods are effective at telling motorists to slow down. Kerry Kelly thought: Could something like that help curb air pollution?

Kelly, a chemical engineering assistant professor at the University of Utah, and Utah State University psychology professor Gregory Madden came up with the idea of creating similar displays around areas such as schools and hospitals to see if they could help curtail idling, a main source of pollution. They are part of a team that has received a $1.2 million grant from the National Science Foundation to test their theory and place air-pollution displays at several schools and hospitals in Utah.

"Speed limit signs work so why couldn't something like that work for people who are parked and idling their cars?" says Kelly.

The project will entail designing and developing a system that collects and integrates air-quality measurements, local weather conditions, and thermal images and dynamically provides feedback to drivers. This system will operate similarly to real-time speed limit signs, known as Dynamic Speed Monitoring Displays or Dynamic Speed Display Signs. These displays motivate drivers to slow down by using built-in radar detectors that measure the speed of passing motorists and alert them by flashing their speed when they exceed the limit. Numerous studies have shown that these signs have been effective at modifying drivers' behavior.

Kelly and her team, which also includes University of Utah School of Computing professor Ross Whitaker and U electrical and computer engineering associate professor Pierre-Emmanuel Gaillardon, will measure air quality with a set of low-cost air pollution sensors that continuously measure particulate matter (PM 2.5) as well as ozone, carbon dioxide and carbon monoxide levels. They will also measure wind speed and direction to determine when changing winds alter the pollution levels.

The sensors will be wirelessly connected to big LED displays that present messages alerting parked motorists when air pollution readings rise to dangerous levels. The hope is these warnings can motivate people to turn off their engines. Each display would gather integrated measurements from three to five custom-made sensor nodes that cover about a 200-foot area. Kelly and her team would also use thermal imaging to determine how many cars are idling at one time to alert drivers when too many vehicles are still running. USU's Madden, who specializes in the field of "behavioral economics," would create community-crafted messages for the displays that best motivate the drivers to make smart choices.

The pilot project would involve placing signs at drop off zones at one school and one hospital each in Salt Lake and Cache counties. Intermountain Healthcare, which operates 24 hospitals in Utah, is working with Kelly on the project as well as the Utah Clean Cities Coalition, which helps organizations and fleets to reduce vehicle emissions. She hopes to begin the pilot in the winter of 2021.

Researchers estimate that idling not only wastes about six billion gallons of fuel each year but that personal vehicles alone generate around 30 million tons of toxic carbon dioxide just by idling, according to the U.S. Department of Energy. Seven states and parts of Utah have restricted idling.

Kelly, who is also associate director of the U's Program for Air Quality, Health and Society and serves on the Utah State Air Quality Policy Board, said people receive most of their exposure to air pollution during their commute to and from work and that children can be exposed to pollution most during the pickup and drop off at school.

"Children are much closer in height to where the tailpipe is," she says, "and they have a much faster breathing rate than adults, and their lungs are still developing, which means they're more susceptible to pollution."

If the pilot project proves successful, Kelly hopes one day these air-pollution displays can raise awareness for motorists about air pollution the same way speed limit displays have been helping them slow down.

"This could be as ubiquitous as speed limit signs if we have them at school drop off zones, airports, and other places to discourage idling," she says. "More broadly, you can use this kind of information to help people think about the environment and health and the decisions they're making. This could make a difference." 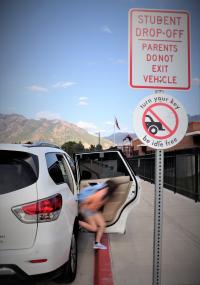