Scientists have identified a key nutrient source used by algae living on melting ice surfaces linked to rising sea levels. The Greenland ice sheet - the second largest ice body in the world after the Antarctic ice sheet - covers almost 80% of the surface of Greenland. Over the last 25 years, surface melting and water runoff from the ice sheet has increased by about 40%. The international research team, led by the University of Leeds, analysed samples from the southwestern margin on Greenland's 1.7 million km² ice sheet over two years. They discovered that phosphorus containing minerals may be driving ever-larger algal blooms on the Greenland Ice Sheet. As the algal blooms grow they darken the ice surface, decreasing albedo - the ability to reflect sunlight. The blooms cause increased melting thus contributing to higher sea levels. In particular, a band of low-albedo ice, known as the Dark Zone, has developed along the western margin of the massive ice sheet.

The research, published in Nature Communications, investigates the origin and impact of this phosphorus on algal blooms the Greenland Ice Sheet, improving understanding of how glacier ice algal blooms will contribute to future ice sheet melting.

By examining the surface dust, the scientists were able to demonstrate how phosphorus is used as a key nutrient to help the algae grow, identifying the phosphorus-bearing mineral hydroxylapatite as the source of fuel for the blooms in the Dark Zone. The hydroxylapatite was blown onto the ice from local rock outcrops.

Dr Jenine McCutcheon led the study while at Leeds' School of Earth and Environment, and is now an Assistant Professor at the University of Waterloo, Canada.

She said: "The photosynthesis rate of the ice algae improved significantly when we provided them with a source of phosphorus.

"Our mineralogy results revealed that the phosphorus used by ice algae may be coming from the hydroxylapatite we identified in the mineral dust.

"It's important to understand the controls on algal growth because of their role in ice sheet darkening.

"Although algal blooms can cover up to 78% of the bare ice surfaces in the Dark Zone, their abundance and size can vary greatly over time."

Dr McCutcheon added: "From one season to the next, algal blooms may change and vary in intensity, making them difficult to model year-to-year".

Associate Professor, Jim McQuaid at Leeds' School of Earth and Environment, is a co-author of the paper.

He said: "Mineral dust can be transported thousands of miles by wind, but the dust we examined was from local sources. As dryland areas in northerly latitudes become even drier under climate change, we can expect to see more dust transported and deposited on the Greenland Ice Sheet, further fuelling algal blooms.

"As atmospheric scientist, it's exciting to see how wind-blown mineral dust is linked to algal bloom development and impacts ice sheet melting."

Previous studies have shown that since 2000, the melt season in the Dark Zone has progressively started earlier and lasted longer, resulting in reduced ability for the ice sheet to reflect solar radiation.

Dr McCutcheon said: "The findings of this study will improve how we predict where algal blooms will happen in the future, and help us gain a better understanding of their role in ice sheet albedo reduction and enhanced melting."

Professor Liane G. Benning is the Leeds Principal Investigator of the £4 million Natural Environment Research Council project Black and Bloom, and is now at the German Research Centre for Geosciences in Potsdam, Germany.

She said: "The glacier ice algae bio-mine the phosphorus from the minerals fuelling the blooms that cover larger and larger areas each year, leading to more melting and faster rising sea levels.

"As current icesheet and climate models do not include this phenomena, this research will advance these models and give us a greater understanding of the annual lifecycle of algal blooms." 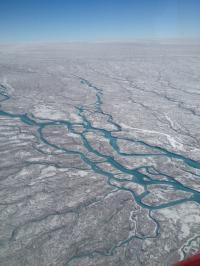