Scientists at the University of Washington have discovered that a common type of cell in the vertebrate immune system plays a unique role in communication between other cells. It turns out that these cells, called macrophages, can transmit messages between non-immune cells.

Their paper, published online Feb. 16 in the journal Science, describes how pigment cells in a species of fish have co-opted macrophages to deliver messages important for pigment patterning in skin. This is the first reported instance of macrophages relaying messages over a long distance between non-immune cells. But since the macrophages are common to all vertebrates, the researchers believe their discovery is no quirk of aquatic life. Macrophages may be common interlocutors for long-distance messages among cells.

"If pigment cells have figured out how to use macrophages for signaling, it stands to reason that others have as well," said senior author and UW biology professor David Parichy. "This could occur in a variety of cells and animals."

Parichy and lead author Dae Seok Eom, a UW postdoctoral researcher, discovered this new role for macrophages while studying zebrafish. They had wanted to understand how the zebrafish gets its telltale stripes of silver-yellow and black. Each color -- black, yellow and silver -- arises from a different type of pigment cell. When zebrafish are juveniles, these pigment cells migrate to the right spot to create the stripes.

"As they migrate, communication among these three populations of pigment cells is critical to forming the stripes we see in adult zebrafish," said Parichy.

"Xanthoblasts sent these thin projections out in circuitous, almost random directions," said Parichy. "The projections would eventually encounter another pigment cell, the black melanocyte, and stop."

Eom discovered that these projections -- which they named "airinemes" for mathematician and astronomer Sir George Airy, who described the optical limits to view small objects, as well as the Greek messenger goddess Iris -- contained tiny, membrane-bound packages of proteins that provide molecular signals to melanocytes, the black pigment cells. The researchers showed that when an airineme from a xanthoblast encountered a melanocyte, the signal proteins from the airineme would cause the black pigment cell to migrate into the stripe.

But they didn't understand how airinemes found melanocytes, or why they took such a seemingly random route, until Eom made a critical observation.

Macrophages are constantly on the move. In fish, people and everything in between, they wander the tissues of the body, "crawling" along like amoebae. Along the way, they sample their environment, picking up and ingesting debris. Their scavenged prizes are often harmless cellular detritus. But if they ingest a bit of a pathogen, or receive signals that a cell nearby is under assault from an invader, macrophages can alert other cells of the immune system.

Armed with this knowledge, Eom tested whether macrophages were truly facilitating the dialogue between yellow and black pigment cells. Using genetic tools, he created zebrafish without macrophages and saw that xanthoblasts produced far fewer airinemes. And under these conditions, melanocytes did not migrate properly to form stripes.

Under the microscope, Eom captured images and movies of how macrophages behaved when they randomly encountered an airineme. A macrophage would seemingly "engulf" one of the round, globular protein packages on the airineme and drag it along, stretching the airineme out.

"Now we know why airinemes seem to take such a meandering, random route," said Eom. "They are being dragged by macrophages that are themselves moving along randomly."

Eom showed that airineme membranes contain a type of lipid that is often an "eat me" signal for macrophages, which may explain why the macrophages attach to and drag along these projections. He and Parichy plan to investigate why macrophages do not digest the airinemes and how the airineme is "handed off" specifically to a melanocyte.

But given the macrophage's tendency to wander and pick up objects, Parichy believes this is unlikely to be the sole instance of macrophage co-option by cells outside of the immune system.

"It's very plausible that what we've seen here occurs in other contexts where macrophages play important roles, from tissue development and regeneration to cancer," said Parichy. "We can easily see how macrophages might facilitate signaling between cells in a variety of situations." 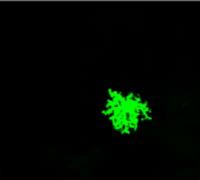