The development of minimally and even non-invasive technologies is increasing in the medical field. It is now possible, for instance, to carry out a range of operative procedures using keyhole surgery with minimal use of the scalpel, leaving only tiny scars as a result. Similar opportunities are now becoming available when providing doses of active agents to patients – instead of using injections or probes to deliver drugs, it will in future be possible to supply them via a plaster which continuously, gently and painlessly delivers the required dosage through the skin.

Drug-loaded plaster to counter the fear of injections

For some years now premature babies – "preemies" – have been given caffeine to prevent respiratory arrest. The dose of caffeine is supplied to the infant in the incubator via a tube or through injection, both of which represent additional stress for the still very sensitive child. On top of this, neither method allows the drug to be dosed in an optimal manner, since at the moment of delivery a peak in concentration occurs followed by a sometimes rapid drop in its value. An ideal dosage technique would be able to maintain a stable concentration over a period of several hours.

In a project carried out in collaboration with the University Hospital, Zurich, and financed by the Swiss National Science Foundation, Empa has now developed a plaster which delivers the active agent via a membrane. This can be simply stuck to the skin of the preemie, after which it will provide the tiny patient with a continuous transdermal dose of, say, caffeine for several hours, without stressing the child as an injection would have done.

Developed in the laboratory, tested at the University Hospital

The membranes developed at Empa change their properties when they are irradiated with UV light. A similar effect is seen in photochromic sunglasses, where silver-doped glass reacts to UV light by darkening. In the new medicinal membranes, however, another light-sensitive functional chemical group is active, so called spiropyrans. When activated, these make the membrane more permeable, so that the active agent is able to pass through it more rapidly, a capability which is retained for several hours. In the absence of UV irradiation, the membrane simply prevents the active agent from permeating through it, as the researchers report in a recently published study in the scientific journal «Advanced Functional Materials».

The ability to precisely control both the quantity of active agent delivered by the membrane and the duration of delivery was of essential importance in the development. The medical staff at the University Hospital of Zurich, who were involved in the project, believe that the new plaster has a good chance of market success, since the delivery rate can be exactly controlled and adjusted to suit individual requirements. It will, however, be some time before the tiny patients can enjoy the new technique as currently Empa is seeking a partner to take on production of the plaster on an industrial scale. 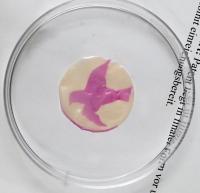