Rising temperatures could mean no male loggerhead turtles hatch at a key breeding ground by the end of this century, new research suggests.

The University of Exeter study also warns that - by 2100 - more than 90% of loggerhead nests on the Cape Verde islands could incubate at "lethally high temperatures", killing turtles before they hatch.

The sex of turtle hatchlings is determined by incubation temperature, and this study combined current temperature and hatchling data with projections from the Intergovernmental Panel on Climate Change (IPCC).

Even under a scenario based on low future emissions and warming, by 2100 just 0.14% of hatchlings would be male.

Under mid and high-emissions scenarios, hatching of male loggerheads could cease entirely.

"Cape Verde hosts one of the largest nesting population of loggerhead turtles in the world - up to 15% of the global nesting total," said Dr Lucy Hawkes, of the University of Exeter.

"We estimate that 84% of current hatchlings are female, and warmer temperatures will increase this proportion.

"Under all three climate change scenarios in our study, by 2100 more than 99% of hatchlings would be female - and under mid and high-emissions scenarios there could be no males at all."

Lead author Claire Tanner, who worked on the study as part of a masters at the University of Exeter, said: "What surprised us was how even the low emissions scenario has detrimental effects for this population.

"What this shows is that now is the time to act on climate change - before it is too late to prevent the estimations seen in this paper."

The projections in the study are based on current nesting behaviour, and the researchers say loggerheads could adapt to some extent by nesting earlier in the year, when it is cooler.

Dr Hawkes said natural selection should favour turtles that do this, but the long lifespan of loggerheads and the speed of climate change will probably mean they cannot evolve fast enough.

About 85% of loggerhead nests in Cape Verde are currently laid on Boa Vista, where incubation temperatures are coolest - so most of the population cannot switch to cooler islands.

However, the study says they might benefit from "refugia" - places where specific features, such as shade from trees or the landscape, provide cooler conditions.

It is not clear how long it will take the population to decline if males stop being produced, as the reproductive lifespan of males is not known - so older males may continue breeding for many years after new males stop being hatched.

Previous studies have been done on turtles breeding in Cape Verde, but this study was unusual because it examined all the areas where turtles breed (known as rookeries).

The work was carried out with bios.cv, an NGO that studies the biodiversity of the Cape Verde islands and has been working on sea turtles across the Cape Verde archipelago since 2013. 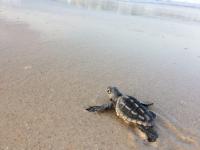 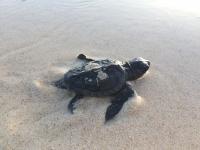