The group practice of the Transcendental Meditation® and TM-Sidhi® programs in Cambodia between 1993 and 2008 was associated with a 96.2% decline in sociopolitical violence in that war-torn country compared to violence in the preceding three years, according to a new peer-reviewed study published in Studies in Asian Social Science.

According to the study, the likelihood that this reversal in the rising 1990-1992 trend of violence occurred randomly was one chance in 10 million, suggesting that meditation can indeed have a coherence-creating effect on society.

"Maharishi Vedic University was established by Maharishi in Cambodia on January 1, 1993, for the declared purpose of bringing peace and prosperity to Cambodia," said study author Lee Fergusson. "The positive influence of the MVU meditating groups was recognized by officials of the Cambodian government."

The late King Norodom Sihanouk was quoted as saying, "Maharishi Vedic University is playing an important role in human resource development and in [the] restoration of peace and expansion of prosperity throughout the country."

Up to 1,250 students participated

The reduction in violence began in January 1993, when more than 550 students began practicing the Transcendental Meditation technique together twice daily in a group at Maharishi Vedic University in Cambodia. Also, 100-200 students practiced the TM-Sidhi program together twice a day in a group as part of their Consciousness-BasedSM education curriculum starting in 1994.

Across three MVU campuses, up to 1,250 students contributed to increased coherence in collective consciousness through their daily group Transcendental Meditation practice during 1993-2008.

The study is the first to use an explanatory mixed-methods research design to explore the growth of social coherence using time series analysis and qualitative content analysis of news articles. The researchers analyzed monthly data on the level of sociopolitical violence obtained from automated content-analysis of news reports performed by a leading independent research organization.

Other published research by Dr. Fergusson, professor and founding director of Maharishi Vedic Research Institute, Australia, documents the dramatic economic and social transformation of Cambodia after the founding of MVU.

In 1990, Cambodia, devastated by decades of war, was the poorest country in the world. After establishment of MVU, Cambodia's gross domestic product (GDP) growth rates averaged 8.9%, and poverty was reduced by 63% between 1994 and 2008. By 2010 Cambodia was ranked 63rd out of 152 countries on the international scale of poverty, an unprecedented jump of 89 places in less than one generation.

Reference: L. C. Fergusson & K. L. Cavanaugh (2019). Socio-political violence in Cambodia between 1990 and 2008: An explanatory mixed methods study of social coherence. Studies in Asian Social Science, 6(2), 1-45. A PDF of the article may be downloaded at http://www.sciedupress.com/journal/index.php/sass/issue/view/789.

The study was sponsored by Maharishi Vedic Research Institute, Australia. 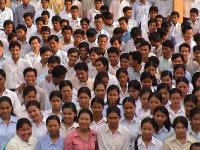 A Student Assembly at Maharishi Vedic University campus in Cambodia