The moon was bombarded by two distinct populations of asteroids or comets in its youth, and its surface is more complex than previously thought, according to new results from NASA's Lunar Reconnaissance Orbiter (LRO) spacecraft featured in three papers appearing in the Sept. 17 issue of Science.

In the first paper, lead author James Head of Brown University in Providence, R.I., describes results obtained from a detailed global topographic map of the moon created using LRO's Lunar Orbiter Laser Altimeter (LOLA). "Our new LRO LOLA dataset shows that the older highland impactor population can be clearly distinguished from the younger population in the lunar 'maria' -- giant impact basins filled with solidified lava flows," says Head. "The highlands have a greater density of large craters compared to smaller ones, implying that the earlier population of impactors had a proportionally greater number of large fragments than the population that characterized later lunar history."

Meteorite impacts can radically alter the history of a planet. The moon, Mars, and Mercury all bear scars of ancient craters hundreds or even thousands of miles across. If Earth was subjected to this assault as well -- and there's no reason to assume our planet was spared -- these enormous impacts could have disrupted the initial origin of life. Large impacts that occurred later appear to have altered life's evolution. The approximately 110-mile-diameter, partially buried crater at Chicxulub, in the Yucatan Peninsula of Mexico, is from an impact about 65 million years ago that is now widely believed to have led or contributed to the demise of the dinosaurs and many other lifeforms.

Scientists trying to reconstruct the meteorite bombardment history of Earth face difficulty because impact craters are eroded by wind and water, or destroyed by the action of plate tectonics, the gradual movement and recycling of the Earth's crust. However, a rich record of craters is preserved on the moon, because it has only an extremely thin atmosphere – a vacuum better than those typically used for experiments in laboratories on Earth. The moon's surface has no liquid water and no plate tectonics. The only source of significant erosion is other impacts.

"The moon is thus analogous to a Rosetta stone for understanding the bombardment history of the Earth," said Head. "Like the Rosetta stone, the lunar record can be used to translate the 'hieroglyphics' of the poorly preserved impact record on Earth."

Even so, previous lunar maps had different resolutions, viewing angles, and lighting conditions, which made it hard to consistently identify and count craters. Head and his team used the LOLA instrument on board LRO to build a map that highlights lunar craters with unprecedented clarity. The instrument sends laser pulses to the lunar surface, measures the time that it takes for them to reflect back to the spacecraft, and then with a very precise knowledge of the orbit of the LRO spacecraft, scientists can convert this information to a detailed topographic map of the moon, according to Head.

Objects hitting the moon can be categorized in different "impactor populations," where each population has its own set of characteristics. Head also used the LOLA maps to determine the time when the impactor population changed. "Using the crater counts from the different impact basins and examining the populations making up the superposed craters, we can look back in time to discover when this transition in impactor populations occurred. The LRO LOLA impact crater database shows that the transition occurred about the time of the Orientale impact basin, about 3.8 billion years ago. The implication is that this change in populations occurred around the same time as the large impact basins stopped forming, and raises the question of whether or not these factors might be related. The answers to these questions have implications for the earliest history of all the planets in the inner solar system, including Earth," says Head.

In the other two Science papers, researchers describe how data from the Diviner Lunar Radiometer Experiment instrument on LRO are showing that the geologic processes that forged the lunar surface were complex as well. The data have revealed previously unseen compositional differences in the crustal highlands, and have confirmed the presence of anomalously silica-rich material in five distinct regions.

Every mineral, and therefore every rock, absorbs and emits energy with a unique spectral signature that can be measured to reveal its identity and formation mechanisms. For the first time ever, LRO's Diviner instrument is providing scientists with global, high-resolution infrared maps of the moon, which are enabling them to make a definitive identification of silicate minerals commonly found within its crust. "Diviner is literally viewing the moon in a whole new light," says Benjamin Greenhagen of NASA's Jet Propulsion Laboratory in Pasadena, Calif., lead author of one of the Diviner Science papers.

Lunar geology can be roughly broken down into two categories – the anorthositic highlands, rich in calcium and aluminium, and the basaltic maria, which are abundant in iron and magnesium. Both of these crustal rocks are what's deemed by geologists as 'primitive'; that is, they are the direct result of crystallization from lunar mantle material, the partially molten layer beneath the crust.

Diviner's observations have confirmed that most lunar terrains have spectral signatures consistent with compositions that fall into these two broad categories. However they have also revealed that the lunar highlands may be less homogenous than previously thought. In a wide range of terrains, Diviner revealed the presence of lunar soils with compositions more sodium rich than that of the typical anorthosite crust. The widespread nature of these soils reveals that there may have been variations in the chemistry and cooling rate of the magma ocean which formed the early lunar crust, or they could be the result of secondary processing of the early lunar crust.

Most impressively, in several locations around the moon, Diviner has detected the presence of highly silicic minerals such as quartz, potassium-rich, and sodium-rich feldspar - minerals that are only ever found in association with highly evolved lithologies (rocks that have undergone extensive magmatic processing).

The detection of silicic minerals at these locations is a significant finding for scientists, as they occur in areas previously shown to exhibit anomalously high abundances of the element thorium, another proxy for highly evolved lithologies.

"The silicic features we've found on the moon are fundamentally different from the more typical basaltic mare and anorthositic highlands," says Timothy Glotch of Stony Brook University in Stony Brook, N.Y., lead author of the second Diviner Science paper. "The fact that we see this composition in multiple geologic settings suggests that there may have been multiple processes producing these rocks."

One thing not apparent in the data is evidence for pristine lunar mantle material, which previous studies have suggested may be exposed at some places on the lunar surface. Such material, rich in iron and magnesium, would be readily detected by Diviner.

However, even in the South Pole Aitken Basin (SPA), the largest, oldest, and deepest impact crater on the moon -- deep enough to have penetrated through the crust and into the mantle -- there is no evidence of mantle material.

The implications of this are as yet unknown. Perhaps there are no such exposures of mantle material, or maybe they occur in areas too small for Diviner to detect.

However it's likely that if the impact that formed this crater did excavate any mantle material, it has since been mixed with crustal material from later impacts inside and outside SPA. "The new Diviner data will help in selecting the appropriate landing sites for potential future robotic missions to return samples from SPA. We want to use these samples to date the SPA-forming impact and potentially study the lunar mantle, so it's important to use Diviner data to identify areas with minimal mixing," says Greenhagen.

The research was funded by NASA's Exploration Systems Missions Directorate at NASA Headquarters in Washington. LRO was built and is managed by NASA's Goddard Space Flight Center in Greenbelt, Md. LOLA was built by NASA Goddard. David E. Smith from the Massachusetts Institute of Technology and NASA Goddard is the LOLA principal investigator. The Diviner instrument was built and is managed by NASA's Jet Propulsion Laboratory in Pasadena, Calif. UCLA is the home institution of Diviner's principal investigator, David Paige.

For images and more information about LRO, visit: http://www.nasa.gov/lro 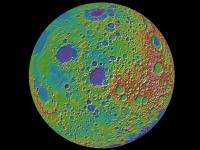