Diseases continue to be a major threat to coral reef health. For example, a relatively recent outbreak termed stony coral tissue loss disease is an apparently infectious waterborne disease known to affect at least 20 stony coral species. First discovered in 2014 in Miami-Dade County, the disease has since spread throughout the majority of the Florida's Coral Reef and into multiple countries and territories in the Caribbean. Some reefs of the northern section of Florida's Coral Reef are experiencing as much as a 60 percent loss of living coral tissue area.

A new study by researchers at Florida Atlantic University's Harbor Branch Oceanographic Institute reveals how a common antibiotic used to treat bacterial infections in humans is showing promise in treating disease-affected Montastraea cavernosa coral colonies in situ. M. cavernosa, also known as the Great Star Coral, is a hard or stony coral found widely throughout the tropical western Atlantic, including several regions currently affected by stony coral tissue loss disease. Preserving M. cavernosa colonies is of particular importance due to its high abundance and role as a dominant reef builder in the northern section of Florida's Coral Reef.

The objective of the study, published in Scientific Reports, was to experimentally assess the effectiveness of two intervention treatments: chlorinated epoxy and amoxicillin combined with Core Rx/Ocean Alchemists Base 2B as compared to untreated controls. Results showed that the Base 2B plus amoxicillin treatment had a 95 percent success rate at healing individual disease lesions. However, it did not necessarily prevent treated colonies from developing new lesions over time. Chlorinated epoxy treatments were not significantly different from untreated control colonies, suggesting that chlorinated epoxy treatments are an ineffective intervention technique for stony coral tissue loss disease.

"There are three possible scenarios that may explain the appearance of new lesions in the amoxicillin treated lesions of the corals that had healed in our study," said Erin N. Shilling, M.S., first author and a recent graduate of the Marine Science and Oceanography masters degree program at FAU Harbor Branch. "It's possible that the causative agent of stony coral tissue loss disease is still present in the environment and is re-infecting quiesced colonies. It also could be that the duration and dose of this antibiotic intervention was sufficient to arrest stony coral tissue loss disease at treated lesions, but insufficient at eliminating its pathogens from other areas of the coral colony."

The study was conducted approximately 2 kilometers offshore from Lauderdale-by-the-Sea in Broward County, Florida, at sites with a maximum depth of 10 meters. Both colony disease status and treated lesion status were analyzed independently so that the treatment's effectiveness at halting individual lesions could be assessed while also determining if a treatment had any impact on the colony as a whole. Colonies were monitored periodically over 11 months to assess treatment effectiveness by tracking lesion development and overall disease status.

Voss notes that many coral diseases are still poorly characterized, which has led to calls for increased research and intervention efforts to support adaptive management strategies particularly given the considerable impacts of diseases on coral reefs over the past five decades.

"Results of our experiment expand management options during coral disease outbreaks and contribute to overall knowledge regarding coral health and disease," said Voss.

This research is part of a highly coordinated collaboration through the Disease Advisory Committee (DAC) organized by the Florida Department of Environmental Protection (floridadep.gov/rcp/coral/content/stony-coral-tissue-loss-disease-response) and NOAA. Voss and Shilling are members of the DAC and part of the reconnaissance and intervention team that has collaboratively developed treatment methods, research objectives, and responses to this disease outbreak. Researchers from Nova Southeastern University, Smithsonian Marine Station and the Florida Fish and Wildlife Conservation Commission also are major partners on this team.

Ian Combs, M.S., another recent FAU graduate from Voss's lab and a co-author, helped to develop some of the coral fate-tracking techniques used in the study.

This research was funded by the Florida Department of Environmental Protection (Awards B430E1 and B55008 awarded to Voss), and the Environmental Protection Agency (South Florida Geographic Initiative award X7 00D667-17). Additional funding was awarded to Shilling by the Harbor Branch Oceanographic Institute Foundation through the Indian River Lagoon Graduate Research Fellowship.

All work was carried out under permission of the Florida Fish and Wildlife Conservation Commission (permits SAL-18-2022-SRP and ASL-19-1702-SRP). 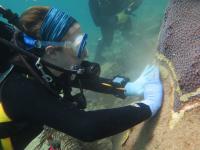 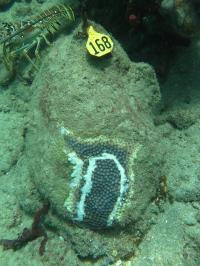 Base 2B plus amoxicillin treatment