"This paper highlights a connection between the taste system and male reproduction," said lead author Bedrich Mosinger, MD, PhD, a molecular biologist at Monell. "It is one more demonstration that components of the taste system also play important roles in other organ systems."

While breeding mice for taste-related studies, the researchers discovered that they were unable to produce offspring that were simultaneously missing two taste-signaling proteins.

As reported online in advance of print in the Proceedings of the National Academies of Sciences, the critical proteins were TAS1R3, a component of both the sweet and umami (amino acid) taste receptors, and GNAT3, a molecule needed to convert the oral taste receptor signal into a nerve cell response.

Breeding experiments determined that fertility was affected only in males. Both taste proteins had previously been found in testes and sperm, but until now, their function there was unknown.

In order to explore the reproductive function of the two proteins, the research team engineered mice that were missing genes for the mouse versions of TAS1R3 and GNAT3 but expressed the human form of the TAS1R3 receptor. These mice were fertile.

However, when the human TAS1R3 receptor was blocked in the engineered mice by adding the drug clofibrate to the rodents' diet, thus leaving the mice without any functional TAS1R3 or GNAT3 proteins, the males became sterile due to malformed and fewer sperm. The sterility was quickly reversed after clofibrate was removed from the diet.

Clofibrate belongs to a class of drugs called fibrates that frequently are prescribed to treat lipid disorders such as high blood cholesterol or triglycerides. Previous studies from the Monell team had revealed that it is a potent inhibitor of the human, but not mouse, TAS1R3 receptor.

Noting the common use of fibrates in modern medicine and also the widespread use in modern agriculture of the structurally-related phenoxy-herbicides, which also block the human TAS1R3 receptor, Mosinger speculates that these compounds could be negatively affecting human fertility, an increasing problem worldwide.

He in turn notes positive implications related to the research. "If our pharmacological findings are indeed related to the global increase in the incidence of male infertility, we now have knowledge to help us devise treatments to reduce or reverse the effects of fibrates and phenoxy-compounds on sperm production and quality. This knowledge could further be used to design a male non-hormonal contraceptive."

Previous work from Monell and other groups has shown that some taste genes can be found in other parts of the body, including stomach, intestines, pancreas, lungs, and brain, where they are increasingly thought to have important physiological functions.

"Like much good science, our current findings pose more questions than answers," comments Monell molecular neurobiologist Robert Margolskee, MD, PhD, also an author on the paper. "We now need to identify the pathways and mechanisms in testes that utilize these taste genes so we can understand how their loss leads to infertility."

The Monell Chemical Senses Center is an independent nonprofit basic research institute based in Philadelphia, Pennsylvania. For 45 years, Monell has advanced scientific understanding of the mechanisms and functions of taste and smell to benefit human health and well-being. Using an interdisciplinary approach, scientists collaborate in the programmatic areas of sensation and perception; neuroscience and molecular biology; environmental and occupational health; nutrition and appetite; health and well-being; development, aging and regeneration; and chemical ecology and communication. For more information about Monell, visit http://www.monell.org. 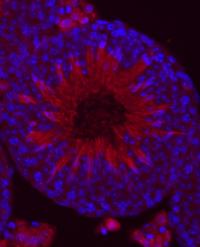