Coastal plant communities are a crucial element of global sea defences but are increasingly threatened by the human-induced effects of climate change, according to new research.

Rising sea levels and the increased frequency and intensity of extreme storm events are having a visible, global impact on beaches, cliff faces and coastal infrastructure.

But a new report suggests their impact on coastal plants, an integral part of shoreline defences, needs to be placed in greater focus.

The research was led by the University of Plymouth, in conjunction with scientists at Utrecht University and Manchester Metropolitan University, and is published in a special edition of the journal Annals of Botany.

It follows a recent assessment by the Intergovernmental Panel on Climate Change (IPCC 2019), which asserted that anthropogenically-driven climate change poses a severe environmental threat to estuarine and coastal ecosystems.

This report not only reviews how the flood and erosion threats posed by a combination of sea level rise and storms can affect coastal sub-, inter- and supra-tidal plant communities, but also highlights the contribution that habitats like saltmarshes, mangrove forests, sand dunes and kelp beds make to coastal protection.

Dr Mick Hanley, Associate Professor (Reader) in the School of Biological and Marine Sciences at the University of Plymouth, led the research. He said: "It has been suggested that by 2050, it could cost well over $50billion to protect the world's largest cities from coastal flooding. In contrast, coastal vegetation can offer natural protection against erosion and flooding for a fraction of the costs associated with constructing so-called hard defences like concrete walls. Society is only just beginning to appreciate this, but estuarine and coastal ecosystems can be integrated into a dynamic, low-cost flood defence strategy to meet the ever increasing challenges posed by rising sea-levels and storms."

As well as highlighting that the threats posed by extreme weather to coastal plant communities are undoubtedly severe, the study calls for biologists and ecologists to work alongside coastal scientists, environment agencies and land managers to identify the key species and habitats for coastal defence and how they can be both promoted and protected in the future.

Central to that objective, the authors argue, is the need to develop and combine long-term monitoring with flood risk models to better predict where and how storms and other climate change-driven phenomenon influence coastal ecosystems and services.

Dr Hanley, who also co-edited the Annals of Botany special edition focusing on the vulnerability to, and management of, plant communities in the face of increased flood risk, added: "The realisation that coastlines globally are now facing increased threats provides the impetus for understanding how hurricanes, typhoons, cyclones and other extreme weather events can affect coastal vegetation. That is critical to ensure we can effectively manage risk over the coming decades, but considerable work is needed to ensure the potential power of plants to defend our coastlines is not lost before it's fully understood." 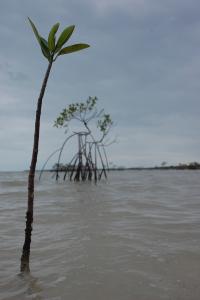