Ultrasound has been used for decades to study dolphin health and much of that work has been pioneered by veterinarians at the National Marine Mammal Foundation (NMMF). But in a groundbreaking study just published in Veterinary Radiology & Ultrasound, scientists have developed a new ultrasound technique for evaluating dolphin fetuses at all stages of gestation. This recent advancement in dolphin medicine allows veterinarians to evaluate dolphin pregnancies the same way doctors approach pregnancies in humans.

"We can now re-create the human 20-week fetal ultrasound exam in dolphins, which means we can better understand the health challenges dolphin mothers and their babies are facing," said NMMF Executive Director Dr. Cynthia Smith."This is a game-changer for the conservation of bottlenose dolphins and other small cetaceans around the world."

To develop the technique, veterinarians followed 16 healthy pregnancies of dolphins in human care and determined normal findings for both the fetus and placenta. The Chicago Zoological Society's radiologist, Dr. Marina Ivanči?, collaborated on the project.

"This new technique can be performed in a matter of minutes and provides a wealth of information about the health of the dolphin fetus," said Dr. Ivanči?. "We are thrilled to make this technique widely available to veterinarians and radiologists, which has the potential to elevate dolphin medicine globally."

The work was part of an investigation into the long-term health effects of the Deepwater Horizon oil spill, which caused a major reduction in pregnancy success in bottlenose dolphins living within the oil spill footprint. The study was made possible by a research grant from the Gulf of Mexico Research Initiative and is already leading to major breakthroughs in the scientist's ability to understand the reproductive failures.

Future applications of the technique and normal data will help identify fetal abnormalities and maternal illness, helping to determine the cause of reproductive failure in wild and managed dolphin populations.

"This advanced ultrasound technique is allowing us to diagnose problems as early as the first trimester of pregnancy in dolphins," said Dr. Forrest Gomez. "That gives us a chance to determine if there is something that could be done to save the pregnancy, which could prove critical for populations of dolphins and porpoises that are at risk."

The NMMF has also released an important study reporting the normal blood values from dolphins that reproduce successfully. This allows for the early detection of pregnancy problems, which can also help determine the cause of reproductive failures in populations that are struggling to thrive.

Technique allows dolphin pregnancy exams to mirror those in humans 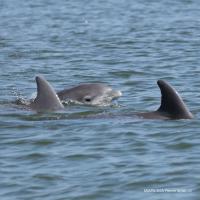