It's a basic rule of effective communication: Consider your audience. According to a new report published online on December 29 in Current Biology, a Cell Press publication, that rule of thumb is not lost on wild chimpanzees. Chimps are more likely to make an alarm call about the presence of a snake when others in the group are unaware of the apparent danger they face, the new evidence shows.

The findings suggest that chimpanzees keep track of the information available to other chimpanzees and make selective decisions about the messages they convey based on that understanding.

"Chimpanzees really seem to take another's knowledge state into account," said Catherine Crockford of the University of St Andrews. "They voluntarily produce a warning call to inform audience members of a danger that they do not know about. They are less likely to inform those who already know about the danger."

The researchers made the discovery by placing model snakes in the path of wild chimpanzees in Uganda and watching their reactions. Those studies showed that when an individual chimp detects a snake, they typically produce an "alert hoo" to tell other chimps within earshot. As new group members arrive on the scene, chimps in the know repeat their "alert hoo," filling in the newcomers that a snake is in their midst.

The findings challenge the notion that only humans recognize ignorance in others and act so as to fill them in, the researchers say. They also show that chimpanzee vocalizations are influenced by a prosocial motivation, to intentionally inform others of danger.

The findings are particularly noteworthy given debates over the role of mental state attribution in the evolution of language. "Some have argued that a crucial stage in this evolution occurred when individuals began producing vocalizations with the goal of informing and thereby reducing ignorance in others," Crockford said. The new findings show that "more of the 'essential ingredients' needed to kick start complex communication are evident in chimpanzees than we thought."

It's also key that the findings were made in chimpanzees in the wild, Crockford added. "The advantage of addressing these questions in wild chimpanzees is that they are simply doing what they always do in an ecologically relevant setting; the task is always relevant," she said.

Before sounding an alarm, chimps consider their audience 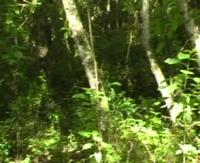 Subjects with First Ignorant and Then Knowledgeable Receivers