New York, NY--August 1, 2018--Brown fat tissue in the body can burn enormous amounts of energy to generate heat, and studies in humans and animals have suggested that increasing the amount of healthy brown fat might help weight management and reduce symptoms of diabetes. However, how to safely and effectively increase brown fat has been a significant challenge for researchers.

A Columbia Engineering team led by Sam Sia, professor of biomedical engineering, has developed a simple, innovative method to directly convert white fat to brown fat outside the body and then reimplant it in a patient. The technique uses fat-grafting procedures commonly performed by plastic surgeons, in which fat is harvested from under the skin and then retransplanted into the same patient for cosmetic or reconstructive purposes. The researchers report in a Scientific Reports study (May 21) that they successfully converted harvested white fat to brown fat in the lab for potential use as a therapy.

Other methods to increase brown fat include chronic cold exposure, which is uncomfortable for most people, and pharmaceuticals that can cause side effects by targeting other organs. "Our approach to increasing brown fat is potentially safer than drugs because the only thing going into patients is their own tissue, and it's highly controllable because we can tune the amount of brown fat we inject," says Sia. "The process is also so simple that it could be potentially performed using an automated system within a doctor's office or clinic."

The team converted white fat to brown fat by culturing tissue fragments in media containing growth factors and other endogenous browning factors for one to three weeks to stimulate the "browning" process. They assessed the browning of the white fat by measuring levels of several brown fat biomarkers, including mitochondrial activity and the brown fat protein marker UCP1. In one of the study's experiments, they discovered that subcutaneous white fat in mice could be directly converted to brown fat outside the body, and that the brown fat both survived and remained stable after injection into the same mouse for a long period (two months in this experiment).

"The persistence of the converted brown fat is very important because we know that when white fat is naturally stimulated to turn to brown fat in vivo, through cold exposure for example, it can rapidly change back when the stimulation is removed," says Brian Gillette, the study's co-author and a Columbia-trained biomedical engineer now working in the department of surgery at NYU Winthrop Hospital. "Even though we could repeat the procedure several times if we needed to, since it's minimally invasive, it is critical that the brown fat survives well and remains stable so that it can function as an effective therapy."

The researchers then used their methods on human subcutaneous fat and were able to effectively convert it to brown fat. "This suggests that it might be possible one day to attempt our approach in humans as a potential therapy to help with weight loss, control of blood glucose levels, or to prevent weight gain," says Nicole Blumenfeld, a PhD student working with Sia and lead author of the paper.

The researchers note that, while the mice on a high fat diet treated with directly converted brown fat in the experiment did not show statistically significant weight loss versus a control group treated with unconverted white fat, the study demonstrates a simple and scalable tissue-grafting strategy that increases endogenous brown fat.

"This is an exciting advance toward engineered brown adipose tissue in clinical applications if it is proven to be safe and effective in humans," says Li Qiang, assistant professor in pathology and cell biology at Columbia University Medical Center who was not involved with this study. An expert in the pathophysiology of diabetes and obesity, Qiang documented the mechanism that promotes the "browning" of white adipose tissue.

The researchers are now refining their techniques and dosages and running further studies on the impact of their methods on metabolism and weight regulation. "There is a clear need to explore new weight-loss approaches with the potential for low rates of complications and long-term efficacy," Sia adds. "The ability to culture large quantities of tissue at once while retaining its 3D vascular structure is advantageous and holds promise as a potential approach in clinical weight management."

The study is titled "A direct tissue-grafting approach to increasing endogenous brown fat."

This work was supported by a grant from the Coulter Foundation-Columbia University Translational Research Partnership, Columbia and an NIH R01 grant (R01HL095477). N.R.B. was supported by the Columbia Irving Institute for Clinical and Translational Research TL1 Precision Medicine Predoctoral Fellowship (Grant: 1TL1TR00187501). This work was also supported by the Vienna Science and Technology Fund (WWTF) project LS12-059 and the Austrian Science Fund (FWF) project P27391-B26 (both to F.W.K.), and the Animal Phenotyping Core of the New York Obesity Nutrition Research Center NIH P30 DK026687-36 (G.J.S.). 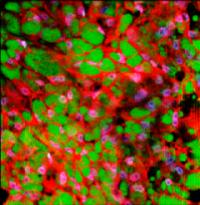