As expected, tropical cyclone Owen recently intensified as it moved over the Gulf of Carpentaria and NASA and the Japan Aerospace Exploration Agency's GPM core satellite found very heavy rainfall occurring within the revived storm. The storm has made a U-turn in the Gulf and is now headed back to Queensland.

The Gulf of Carpentaria is located between Queensland and Northern Territory, Australia.

On December 12, 2018 at 0047 UTC (Dec. 11 at 7:47 p.m. EST) Owen's maximum sustained winds had increased to about 55 knots (63 mph) when the Global Precipitation Measurement mission or GPM core observatory satellite scanned the western side of the tropical cyclone. This wind speed meant that Owen's intensity had reached the equivalent of a strong tropical storm on the Saffir-Simpson hurricane wind scale.

GPM's Microwave Imager (GMI) and GPM's Dual-Frequency Precipitation Radar (DPR) instruments collected data showing that extremely heavy rainfall was occurring in the Arafura Sea well to the northwest of Owen's center of circulation. GPM's GMI indicated that rain in that area was falling at a rate of over 97 mm (3.8 inches) per hour. West of Owen's center, rainfall was occurring at a rate as high as 40 mm (1.5 inches) per hour.

At NASA's Goddard Space Flight Center in Greenbelt, Maryland, a 3-D view was created using GPM data. The 3-D view was created using data from the GPM satellite's Radar (DPR Ku Band) and showed the precipitation structure in storms north of Australia's Northern Territory. Those powerful convective storms in the Arafura Sea were found by DPR to reach extraordinary heights above 17 km (10.54 miles). The extremely heavy downpours in those storms were returning radar reflectivity values higher than 60 dBZ to the GPM satellite.

On Dec. 13, the Australian Bureau of Meteorology or ABM noted that "Severe Tropical Cyclone Owen has started moving eastwards back over the Gulf of Carpentaria and will continue to strengthen as it moves east." Warnings have been dropped from Port Roper to Port McArthur now that the storm has turned back toward the east. Eastern Northern Territory and western Queensland now have all the warning and watches. ABM said the Warning Zone includes Port McArthur in the Northern Territory, to Aurukun in Queensland, including Mornington Island, Karumba, Kowanyama and Pormpuraaw. The Watch Zone extends inland from Karumba to Aurukun as far as Georgetown, Chillagoe and Coen, Queensland.

On Dec. 13 at 9:30 p.m. ACST local time (6:30 a.m. EST) ABM noted that Owen was considered locally as a category 3 storm (a Category 1 hurricane on the Saffir-Simpson Hurricane Wind Scale) with maximum sustained winds near the center at 87 mph (140 kilometers) per hour. Owen was centered near 15.1 degrees south latitude and 136.9 degrees east longitude, about 53 mph (85 km) northeast of Port McArthur and is moving east.

ABM said "Owen is likely to continue to develop further over the next 24 hours as it continues to move east into the central Gulf of Carpentaria and through a more favorable environment. Severe Tropical Cyclone Owen may reach Category 4 intensity early Friday.

A coastal crossing along the southeast Gulf of Carpentaria coast between Gilbert River Mouth to Pormpuraaw later Friday or early Saturday is likely, and there is a chance it crosses the coast as a category 4 system. 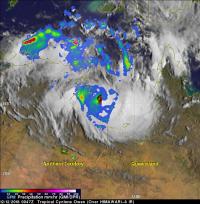