Those who go to a masked ball consciously slip into a different role, in order to avoid being recognized so quickly. Insects were already doing something very similar in the Cretaceous: They cloaked themselves in pieces of plants, grains of sand, or the remains of their prey, in order, for example, to be invisible to predators. An international research team, with participation from the University of Bonn, has now investigated such "invisibility cloaks" encased in amber. The custom-tailored "costumes" also permit conclusions about the habitat at the time. The results have now been published in the journal "Science Advances".

The larva of the lacewing attacks a pseudoscorpion and uses its powerful mouthparts to suck it dry. The larva then puts the remains of the dead prey on its back. The outlines of the lacewing are now unrecognizable. It looks more like a dead pseudoscorpion. This camouflage protects the lacewing against being recognized by predators and at the same makes it easier to hunt its own prey. "With this 'disguise', the lacewing larva pretends to be someone completely different", says Prof. Dr. Jes Rust of the Steinmann-Institute of the University of Bonn. "Using the pieces of its prey, it even takes on the smell of the pseudoscorpion".

The scene plays out in the Cretaceous and is recorded as a "snapshot" in amber. A research team under Dr. Bo Wang of the State Key Laboratory of Paleobiology and Stratigraphy in Nanjing (China) worked together with paleontologists from the University of Bonn and other scientists from China, USA, France, and England to examine a total of 35 insects preserved in amber. With the aid of grains of sand, plant residue, wood fibers, dust, or even the lifeless shells of their victims, the larvae achieved camouflage to perfection. The amber samples come from Myanmar, France, and Lebanon.

Evidence of early camouflage by insects is very rare

"These are very rare fossils, which give us unique insights into life more than 100 million years ago", says Dr. Torsten Wappler of the Steinmann-Institute of the University of Bonn, who joined Dr. Wang and Professor Rust to classify these oldest examples of camouflage. The research team was astonished to see the broad range of camouflage already used by insects in the Cretaceous.

Some larvae fashioned a kind of "knight's armor" from grains of sand, perhaps to protect against spider bites. In order to custom-tailor their "camo", they have even adapted their limbs for the purpose. The larvae were able to turn their legs about 180 degrees, in order to transport the grains of sand onto their back. Others cloaked themselves in plant residue, in order to become one with their surroundings, making them almost undetectable to predators. "It is very surprising how early in evolution such complex insect behavior developed: The larvae had to search actively for suitable 'camouflage material', pick it up, and cloak themselves with it", says Dr. Wang, who, with a stipend from the Humboldt-Stiftung foundation, has been a guest at the University of Bonn several times doing research.

The scientists have analysed the pedigree of these "camouflage insects". Therefore, they know that the animals must have developed such strategies quite independently of one another, because they are not closely related. Professor Rust sums it up: "Apparently, camouflage offers many advantages for the user, for which reason it was 'invented' multiple times during evolution". Today there are still numerous types of insects that make themselves invisible, for instance using grains of sand, such as caddis-fly larvae in rivers and streams.

Based on the camouflage of the various amber insects, the research team reached conclusions about their habitat at the time. Examination of an ancestor of the ant lion under the microscope showed that the camouflage consisted of tiny pieces of fern. "These are fern species, which, for example, were the first types of plants to recolonize after fires", explains Dr. Wappler. Presumably, in the Cretaceous, a bush fire raged, which damaged the trees and stimulated unusually strong resin production. In this way, the "costumed" larvae were trapped in the tree resin and the scene preserved to this today. 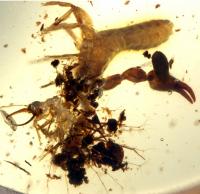